ORIGINAL HANDWRITTEN AND SIGNED PHOTOGRAPH SENT BY PC DAVID RATHBAND TO THE CRIME THROUGH TIME COLLECTION AT LITTLEDEAN JAIL BACK IN SEPTEMBER 2011. 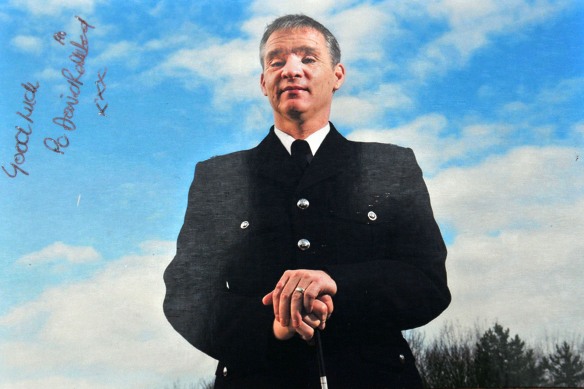 FUNERALSERVICE OF PC DAVID RATHBAND , TO SEE VIDEO PLEASE CLICK ON BELOW IMAGE

AS REPORTED BY THE SUN NEWSPAPER

THE cop blinded by gun maniac Raoul Moat was found dead at his home in a suspected suicide last night.

PC David Rathband, 44, had struggled to cope after being blasted in the face by Moat in July 2010.

Before the end of his break he posted a string of disturbing messages on Twitter suggesting he was considering suicide.One read: “RIP PC Rathband.”

In another tweet he wrote: “I am flying home on Monday and will say goodbye to the children.”

He also commented on the lack of contact with wife Kath and said that she just wanted to be friends.

In another tweet he wrote how he had lost “my sight, my job, my wife and my marriage”.

His mood later appeared to improve when he said he was looking forward to the future.

He also said: “Very emotional few days but back on track. Now focusing on my trip back to the UK and the road ahead.”He also thanked his Twitter followers for their messages of support.

In the last-known picture of David — tweeted by Darren — he was seen sunbathing at a police recuperation centre just six days before his death.

Northumbria Police would not comment on the cause of death last night — but it was feared Rathband hanged himself.

Chief Constable Sue Sim said: “I am deeply saddened to have to confirm the death of PC David Rathband and my thoughts are with his family, friends and colleagues at this difficult time.

“In July 2010 his life changed for ever when he was shot and blinded by Raoul Moat. David showed outstanding bravery in what was a terrifying situation. He was a dedicated officer who acted in the best traditions of the police service.”

A police spokesman added no-one else was being sought in connection with the incident.

“He was declared dead at the scene. A police investigation is under way. The coroner has been informed.”The street where the brave bobby lived was cordoned off last night as an officer stood guard. Forensics experts were at the scene.

A spokesman for the The Blue Lamp Foundation – a charity started by David to help emergency services personnel injured in the line of duty as the result of a criminal act – last night said: “It is with great sadness that we learn of the death of David Rathband. Since being shot in July 2010, David struggled to come to terms with his horrific injuries and the traumatic effect they had on him and his family and friends.

“David’s legacy will live on in the form of The Blue Lamp Foundation. It was David’s wish that those who found themselves in a similar position to him could receive the support that wasn’t available to him at the time.

“David’s family have asked that their privacy be respected at this time and they are allowed the time and space to reflect and grieve.”

Bodybuilding nut Moat had just been freed from prison when he went on his rampage with a sawn-off shotgun on July 3, 2010.

He fled after shooting Samantha and Christopher in Gateshead — and next day blasted Rathband as he sat in his patrol car in Newcastle.

David later said: “I looked into his eyes and saw nothing — no emotion. Then I felt the pain full-on in my face.

“I knew my right eye socket had just exploded and my eye had gone.”

He went on the run for seven days before he was cornered in Rothbury, Northumberland. He killed himself after a tense stand-off with police.

Rathband bravely struggled to cope with his blindness but it proved too much. He split with wife Kath, 42, and moved out of the marital home in a bid to learn to live independently.

Rathband, who had a son, 19, and daughter, 13, admitted last July that he had suicidal thoughts. He said in an interview: “I’m not a robot, I have been badly affected by what’s happened.

“I have to wait and see but as long as I have the conviction to carry on doing the best by my family then I don’t think I can go far wrong.”

But last November Rathband revealed his marriage was over after a trial separation.

The previous August police visited the couple’s home. They were responding to reports of an alleged assault but no further action was taken.

After the split, Rathband was said to have formed a close friendship with 7/7 survivor Lisa French.

Last July he received a special recognition award from PM David Cameron at the Sun-backed Police Bravery Awards. Locals were stunned by the tragedy last night.

PC Rathband’s street was cordoned off with police tape with an officer standing guard.

A teenage girl, who went to the same school as Rathband’s son, said: “PC Rathband was a lovely man and I thought they were a lovely family.

“He did a speech at my friend’s funeral last year and I am really shocked to hear about what has happened. I can’t believe it.

“His family and friends will all be absolutely devastated. It is such a shock to hear that he has died.”

A neighbour added: “It is a big shock. Everyone knows him around here. He was a prominent figure and everyone felt for him knowing what he had been through after he was shot. He seemed very brave.

“I don’t know how it has happened but it is tragic.”