HERE AT THE CRIME THROUGH TIME COLLECTION AT LITTLEDEAN JAIL WE FEATURE AN  IN DEPTH INSIGHT INTO THE ALLEGED MURDERER ….. O J SIMPSON , WHO WAS SUBSEQUENTLY CLEARED OF THE MURDER OF HIS EX WIFE  NICOLE BROWN SIMPSON AND RONALD GOLDMAN. ALSO VARIOUS PERSONALLY SIGNED MEMORABILIA ITEMS FROM HIM .

After retiring from professional football, Simpson had a successful career as a football broadcaster and actor.

In 1995, he was acquitted of the 1994 murder of Nicole Brown Simpson and Ronald Goldman after a lengthy and internationally publicized criminal trial, the People v. Simpson. In 1997, a civil court awarded a judgment against Simpson for their wrongful deaths; to date he has paid little of the $33.5 million penalty.

In September 2007, Simpson was arrested in Las Vegas, Nevada, and charged with numerous felonies, including armed robbery and kidnapping. In 2008, he was found guilty and sentenced to 33 years’ imprisonment, with a minimum of nine years without parole.He is serving his sentence at the Lovelock Correctional Center in Lovelock, Nevada. 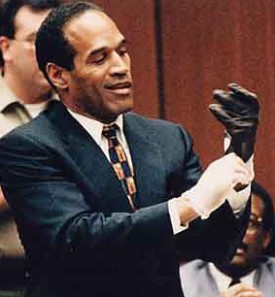 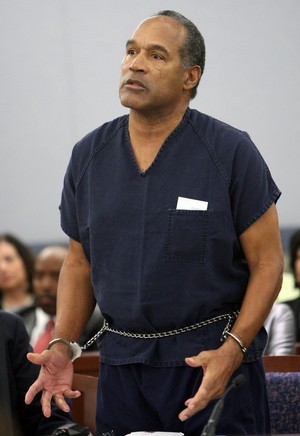 Below is video footage of when Football and film star O.J. Simpson led police on a low-speed chase along the Los Angeles freeways shortly before his arrest for the murders of his ex-wife Nicole Brown and her friend Ron Goldman. This video, aired on CNN, features the sound from OJ’s phone conversation with Homicide Detective Tom Lange. Listen as the accused killer tells Lange that he is the one who “deserves” to be hurt.

Below is an in depth investigation into new evidence that has been found surrounding the murder trial of O.J. Simpson.

Who did kill OJ’s ex-wife Nicole Brown Simpson and her friend Ronald Goldman? This is still a gripping tale. It may be five years on but this story hasn’t lost its heady mixture of violence, race, sex and Hollywood glitz.

Five years ago, the world watched spellbound as OJ Simpson was acquitted of murder. And interest in the case remains as great as ever. Why, asks the BBC’s former Washington correspondent Bridget Kendall, are we still obsessed?

Ask any American exactly where they were when the verdict in OJ Simpson’s trial was announced and they will probably remember. It was one of those defining moments.

When the dramatic announcement came that OJ had been found “not guilty”, the reaction was almost as stunning as the unexpected verdict. America was divided down the middle.

Five years since that moment, and still the ghosts in this weird and ghastly double murder have not been laid to rest. And it is somehow fitting that the latest investigation to unearth new clues into what might have happened – who did kill OJ’s ex- wife Nicole Brown Simpson and her friend Ronald Goldman? – is not the result of police work, but a television documentary, OJ: The Untold Story. Once again, it is trial by television, a TV audience being invited to sift through the evidence and draw their own conclusions.

What is more, there are some startling new revelations and a real-life American private eye to help guide us through the maze of new circumstantial evidence. Not exactly a suave Raymond Chandler hero with deadpan delivery, Bill Dear is no Humphrey Bogart. But as a tenacious private detective from Dallas, Texas, he certainly proves that all those American crime novels got one thing right: one private eye with a bee in his bonnet and apparently boundless energy can get a whole lot further in coming up with new leads than an American city police department.

To begin with gruesome photos from the crime scene and eyewitness accounts from the LA police detectives reminds you of how they built their case, and convinces you all over again that surely the evidence against OJ was overwhelming.

But then comes the analysis: the evidence that does not add up.

Here the makers of this documentary have been careful not to be too categorical. They offer two sets of circumstantial evidence that point to two quite separate suspects and two quite different lines of inquiry. So who do they think did it? There is no final chapter to this new investigation. Watch it, and decide for yourself if you still think OJ is guilty.

Below is video footage of “CBS News RAW”: O.J. Simpson has been sentenced to time in prison for hotel armed robbery.