Above : Charles Manson seen here in open coffin after his death on November 19, 2017

Charles Milles Manson (né Maddox, November 12, 1934 – November 19, 2017) was an American criminal, cult leader, and songwriter. In the late 1960s, he formed what became known as the Manson Family, a quasi-commune in California. Manson’s followers committed a series of nine murders at four locations in July and August 1969. In 1971 he was convicted of first-degree murder and conspiracy to commit murder for the deaths of seven people, all of which were carried out at his instruction by members of the group. Manson was also convicted of first-degree murder for two other deaths.
At the time the Manson Family began to form, Manson was an unemployed ex-convict who had spent half of his life in correctional institutions for a variety of offenses. Before the murders, he was a singer-songwriter on the fringe of the Los Angeles music industry, chiefly through a chance association with Dennis Wilson, drummer and founding member of the Beach Boys. Manson believed in what he called “Helter Skelter”, a term he took from the Beatles’ song of the same name to describe an impending apocalyptic race war. He believed the murders would help precipitate that war. One of his songs, “Cease to Exist”, was recorded by the Beach Boys and renamed “Never Learn Not to Love”. It was released as a B-sided single in 1968 without Manson’s credit.
From the beginning of Manson’s notoriety, a pop culture arose around him in which he ultimately became an emblem of insanity, violence and the macabre. After he was charged with the crimes of which he was later convicted, recordings of songs written and performed by Manson were released commercially, starting with Lie: The Love and Terror Cult (1970). Various musicians have covered some of his songs. Manson was originally sentenced to death, but his sentence was commuted to life with the possibility of parole after California invalidated the state’s death penalty statute in 1972. He served out his life sentence at California State Prison in Corcoran and died at age 83 in 2017. 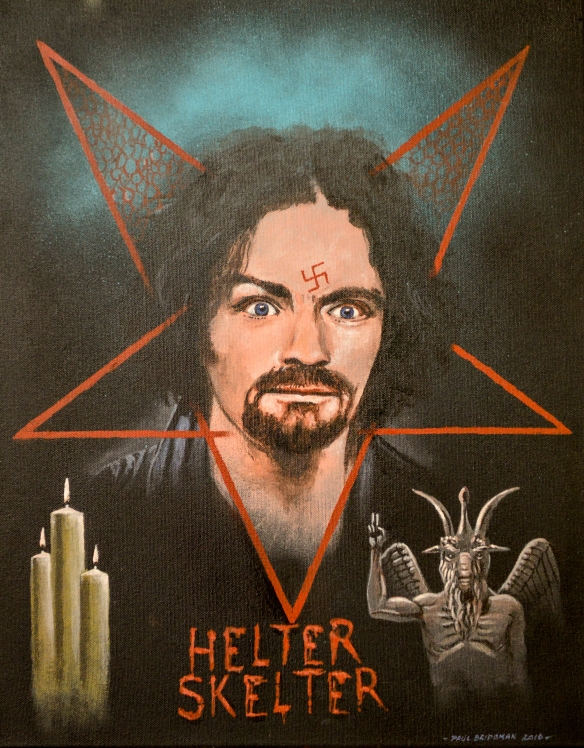 Above: Charles Manson painting kindly donated by Gloucestershire Artist – Paul Bridgman on display at The Crime Through Time Collection at Littledean  Jail .

Charles Manson is a convicted serial killer who has become an icon of evil. In the late 1960s, Manson founded a hippie cult group known as “the Family” whom he manipulated into brutally killing others on his behalf.

Here’s some interactive information , a brief photo gallery  and video footage relating to the infamous cult leader Charles Manson and The Manson Family

FROM THE HANDS OF DEATH

Here on display at the Crime Through Time Collection at Littledean Jail , Forest of Dean,  Gloucestershire, UK ………..we have a number of handwritten and signed letters etc from Charles Manson and some of his disciples along with various other American and UK serial killers.

Charles Manson was born in Cincinnati, Ohio to 16-year-old Kathleen Maddox. Kathleen had run away from home at the age of 15 and spent the next few decades drinking too much, with periods of time spent in jail.

Since his mother couldn’t take care of him, Charles spent his youth at the homes of various relatives and often at special reform schools and boys homes. By age nine, Charles Manson had already started stealing and soon added burglary and stealing cars to his repertoire.

In 1954, at age nineteen, he was released on parole after an unusual bout of good behavior. The next year, he married Rosalie Willis, a waitress, and they had a son together, Charles Manson Jr. (born March 1956). Even while married, Manson had continued making extra money by stealing cars. In April 1956, he was again sent to prison. After Manson had been in prison for a year, his wife found someone new and divorced Manson in June 1957.

In 1958, Manson was released from prison. While out, Manson began pimping, stealing checks from mailboxes, and conned a young woman out of money. He also married again, to a woman named Leona, and fathered a second son, Charles Luther Manson. Manson was again arrested on June 1, 1960 and sent to the McNeil Island Penitentiary off the coast of Washington. His wife soon divorced him.

Manson spent the next six years in prison. It was during this time that he befriended the infamous Alvin “Creepy” Karpis, former member of Ma Barker’s gang. After Karpis taught Charles Manson to play the steel guitar, Manson became obsessed with making music. He practiced all the time, wrote dozens of original songs, and started singing. He believed that when he got out of prison, he could be a famous musician.

Manson Gets a Following

On March 21, 1967, Manson was once again released from prison. This time he headed to San Francisco where, with a guitar and drugs, he began to get a following. In 1968, he and several followers drove to Southern California.

Manson was still hoping for a music career. Through an acquaintance, Manson met and hung out with Dennis Wilson of the Beach Boys. The Beach Boys did record one of Manson’s songs, which appeared as “Never Learn Not to Love” on the B-side of their 20/20 album.

Charles Manson was good at manipulating people. He took pieces from various religions to form his own philosophy. When the Beatles released their White Album in 1968, Manson believed their song “Helter Skelter” predicted an upcoming race war. “Helter skelter,” Manson believed, was going to occur in the summer of 1969 when blacks were going to rise up and slaughter all the white people. He told his followers that they would be saved because they would go underground, literally, by traveling to an underground city of gold located in Death Valley.

However, when the Armageddon that Manson had predicted did not occur, he said he and his followers must show the blacks how to do it.

Manson told four of his followers to go to 10050 Cielo Drive in Los Angeles and kill the people inside. This house once belonged to Terry Melcher, the man who had not helped Manson with his music career. However, Melcher no longer lived there; actress Sharon Tate and her husband, director Roman Polanski, had rented the house. On August 9, 1969, four of Manson’s followers brutally murdered Tate, her unborn baby, and four others who were visiting her (Polanski was in Europe for work). The following night, Manson’s followers brutally killed Leno and Rosemary LaBianca in their home.

It took the police several months to determine who was responsible. In December 1969, Manson and several of his followers were arrested. The trial began on July 24, 1970. On January 25, Manson was found guilty of first degree murder and conspiracy to commit murder. On March 29, 1971, Manson was sentenced to death.

Manson was reprieved from the death penalty in 1972 when the California Supreme Court outlawed the death penalty. Charles Manson now serves a lifetime sentence and periodically comes up for parole.

Though he’s been in prison for over three decades, Charles Manson has received more mail than any other prisoner in the U.S. Charles Manson is currently being held in California’s Corcoran Prison.