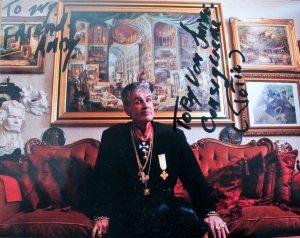 A real-life Mafia consigliere is generally the number three person in a crime family, after the boss and underboss in most cases A crime family normally has only one consigliere at a time, but bosses have on occasion appointed more than one. The boss, underboss, and consigliere constitute a three-man ruling panel, or “Administration.” 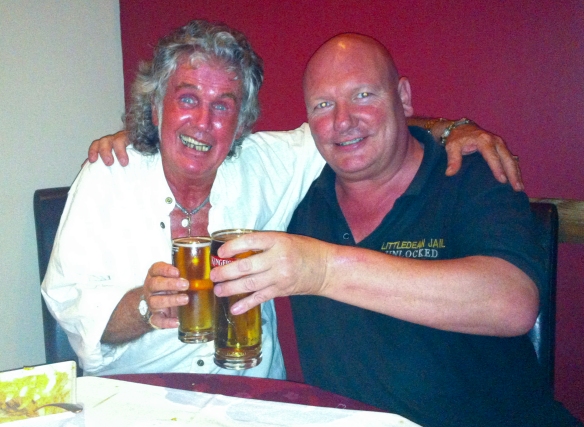 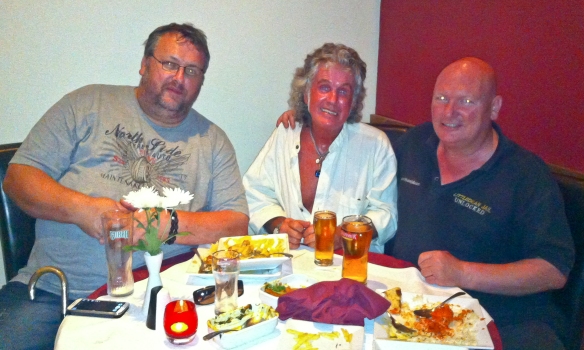 Above are a couple of recent photographs  (16th July 2013 ) taken during a night out in London , UK …. having an Indian curry and a few drinks . 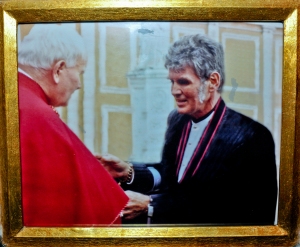 Toby Von Judge pictured here above with His Holiness .. Pope John Paul II at a private meeting at the Vatican in Rome

When a boss gives orders, he issues them in private either to the consigliere or directly to his caporegimes as part of the insulation between himself and operational acts.

Below is a short rare pictorial gallery featuring various old and present day images of Toby Von Judge – Consigliere ….a  long time close personal friend to Andy Jones of the Crime Through Time Collection at Littledean Jail ….The images include Toby pictured with the likes of the Pontiff John Paul , Roy Shaw, A.J, pics from the Reg Kray funeral and the scarf Pavarotti gave to him at a concert .

WHILST YOU WILL NEVER BE ABLE TO FIND ANY PUBLICLY AVAILABLE INFORMATION ON TOBY VON JUDGE ON ANY INTERNET  BASED SOCIAL NETWORKS ….. REST ASSURED HE IS HELD IN THE HIGHEST ESTEEM  IN THE HIGH COUNSEL OF THE INTERNATIONAL  CRIMINAL UNDERWORLDS .

Consigliere: my life’s journey to become the leading technical legal advisor to the world’s leading Mafia heads.  I chart out my evolving personal friendships with family heads past and present: The Capa. Toto de-capo Giuseppe Furlucie. Mario Juliano, Giorgio Gardini, The Pontiff John Paul the Second, Fidel and his brother Ronaldo Castro, and Pablo de Sanchez, John Gotti, Georgie Gambine, Sir Gaylord Plisencie, and Roman Abramovich.  My friendships have given me a unique and unparalleled insight into the closed door workings the Mafia.

My life changing decision to decline my silks at the feet of Lord Chancellor Hailsham at my turning out ceremony at Downing College of Cambridge owing to the fatal flaws inherent inUKcriminal law started my journey to become the trusted consul and advisor to the world’s notorious mafia fraternities.  The journey started out in the Patio Club inWimbledonin the mid 1960’s with coincidentally meeting South London Captain Joey Pyle and Charlie Kray.  Friendships with Ronnie and Reggie Kray followed, continued by Roy Shaw, the Lambrianou’s and Freddy Foreman.  From these beginnings my contacts grew beyond the confines of the UK’s shores.

My psychology of mistrust of authority and the “the system” grew and was bred from the harm I suffered of sexual molestation and mental abuse at the hands of the Social Services system after being abandoned on the steps of Queen Mary’s Hospital in Roehampton as a baby in arms.  My faith in human nature was returned to me by my eventual salvation in the form of His Honour Sir James Richter and wife Deborah, whom became my adopted father and doting mother at the age of 16.  My mother was a close friend to Bobo nanny to their Royal Highnesses Lilibeth and Margret Rose.  This gave me access and unique insight into the behind the scenes relationships and workings of the royal circle.

My story contains the closed door and symbiotic workings of the Mafia and Governments throughout the world.  Domestically this symbiosis can be seen within the command structures shared between MI6, 5 and O29K Special Branch: one could colloquially, but not incorrectly, call these forces the “hit men of the government”.

The Consigliere has lost his best friend,his darling Bonnie a little dog who was the side of his hand, they had been together for 20 years, she was his rock,and will be so much missed by all who new her. his words were, ill always love you Bonnie,then when I die we will be to together. TOBY VON JUDGE  CONSIGLIERE TOTIE,  G.K.K.T   .M.B.E. K.B.E. 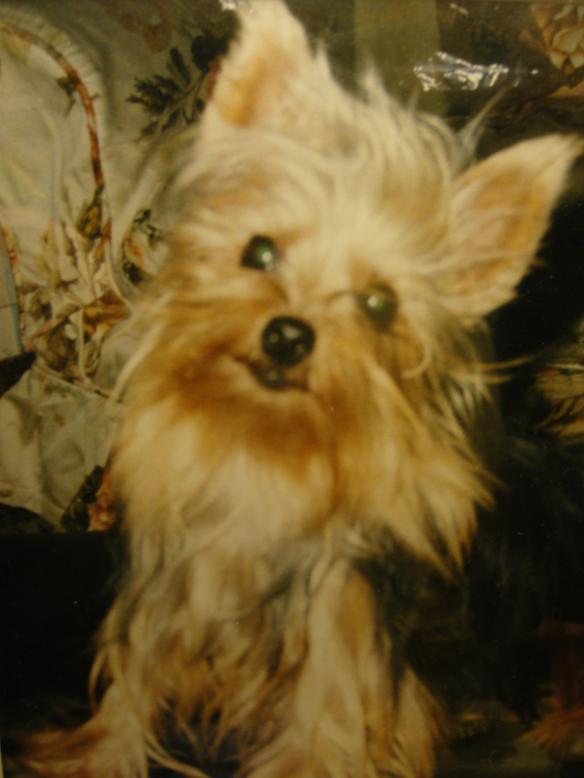 What is a Consigliere ?

Consigliere (Italian consigliere “counselor”, pronounced [konsiʎˈʎɛːre]) is a position within the leadership structure of Sicilian and American Mafia crime families. The word was popularized by Mario Puzo‘s novel The Godfather (1969), and its film adaptation. In the novel, a consigliere is an adviser or counselor to the boss, with the additional responsibility of representing the boss in important meetings both within the boss’s crime family and with other crime families. The consigliere is a close, trusted friend and confidant, the mob’s version of an elder statesman. He is devoid of ambition and dispenses disinterested advice. This passive image of the consigliere does not correspond with what little is known of real-life consiglieri.[1]

A real-life Mafia consigliere is generally the number three person in a crime family, after the boss and underboss in most cases.[2] A crime family normally has only one consigliere at a time, but bosses have on occasion appointed more than one. The boss, underboss, and consigliere constitute a three-man ruling panel, or “Administration.”[3]

When a boss gives orders, he issues them in private either to the consigliere or directly to his caporegimes as part of the insulation between himself and operational acts.

In Italian, consigliere means “adviser” or “counselor.” It is derived from Latin consiliarius (advisor) and consilium (advice). The terminology of the U.S. Mafia is taken from that of the Sicilian Mafia and suggests that an analogy is intended to imitate the court of a medieval Italian principality. For example, Venice was led by a doge (duke) and a consigliere ducale (advisor doge). An underboss will normally move up to boss when the position becomes vacant, so his position is equivalent to that of heir to the throne. Consigliere, meanwhile, is analogous to chief minister or chancellor. (Oddly, in the novel The Godfather, the word is spelled consigliori; in the films, it is clearly pronounced consigliere.) In Joe Bonanno‘s book A Man Of Honor he explains that a consigliere is more of the voice or rep for the soldiers of the family, and may help solve and mediate disputes for the lower echelon of the family.[edit]Etymology

Joe Valachi mentions a mysterious “Sandino” arbitrating disputes as the Genovese family consigliere in the 1940s.[4] But in more recent times, consiglieri have tended to take a more active role in family affairs. In 1971, Colombo family Consigliere Joseph Yacovelli directed a murder campaign against renegade Colombo family soldier Joseph “Crazy Joe” Gallo.[1] Two decades later, another Colombo consigliere, Carmine Sessa, led a hit team that attempted to assassinate the acting boss, Victor Orena.[1] In 1976, Frank Bompensiero was appointed consigliere of the Los Angeles crime family, only to be murdered in a public phone booth in February 1977.[1] Bompensiero’s boss promoted him so that it would cause him to let his guard down.[1] Electronic surveillance in 1979 recorded New England Mafia Boss Raymond Patriarca Jr. talking about appointing his consigliere, so the position need not be chosen as a result of a consensus-seeking process.[1] When New Jersey ConsigliereStefano “Steve the Truck Driver” Vitabile found out in 1992 that his family’s underboss, John “Johnny Boy” D’Amato, was bisexual, he ordered him killed.[5] In 1993, Paul Gulino, a drug dealer and associate of the Bonanno crime family, was murdered after he allegedly “put hands” on his family’s consigliere.[6]

James Ida, the current Genovese consigliere, has been serving a life sentence since 1996. Dominick Cirillo is the family’s acting consigliere. Joseph Corozzo is the current Gambino consigliere, whileAnthony Rabito is consigliere for the Bonanno crime family. As these examples illustrate, consiglieri nowadays are generally former soldiers and capos, not outside advisers.

In the movies The Godfather and The Godfather Part II, the consigliere to Don Vito Corleone (Marlon Brando), and later Don Michael Corleone (Al Pacino), is Tom Hagen (played by Robert Duvall). (In the novel, Tom’s predecessor, Genco Abbandando, is briefly featured, dying in a hospital room on the day of Connie’s wedding. This scene was filmed for the first movie, and has been included in some television showings.) Hagen is the adopted son of Don Vito Corleone, and doubles as the family’s lawyer. At the end of The Godfather, Don Vito’s successor and son, Michael, temporarily demotes Hagen within the organization, saying that things could get rough during the family’s move to Las Vegas, and he needs a “wartime consigliere.” (In an earlier scene, Sonny Corleone, Michael’s older brother and acting Don after Vito Corleone’s attempted assassination, similarly criticizes Hagen.) Vito Corleone, Michael’s father, replaces Hagen at Michael’s side as de facto consigliere until his death. Tom is reinstated after Vito’s death.

In the television series The Sopranos, Silvio Dante is the consigliere to Tony Soprano.

In The Simpsons episode “Donnie Fatso” Homer explains to an FBI agent that he was at one time Fat Tony’s consigliere, (see “The Mook, the Chef, the Wife and Her Homer“) but has trouble pronouncing the word and just says “his Robert Duvall”; a reference to Duvall’s character in The Godfather Series.