ABOVE: ORIGINAL OIL PAINTING BY IN- HOUSE GLOUCESTERSHIRE ARTIST PAUL BRIDGMAN HERE ON DISPLAY AT THE JAIL WITHIN OUR ” DARK TOURIST ART GALLERY ” 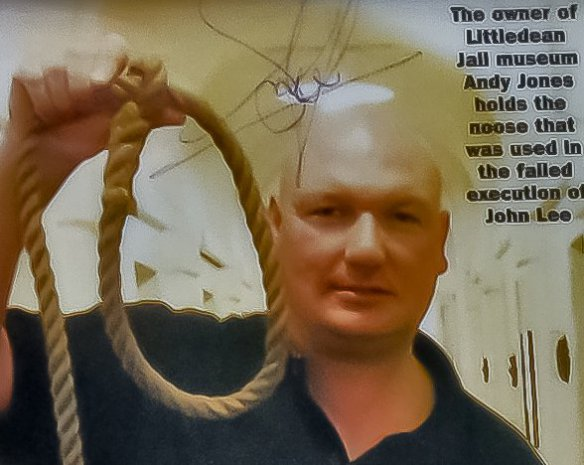 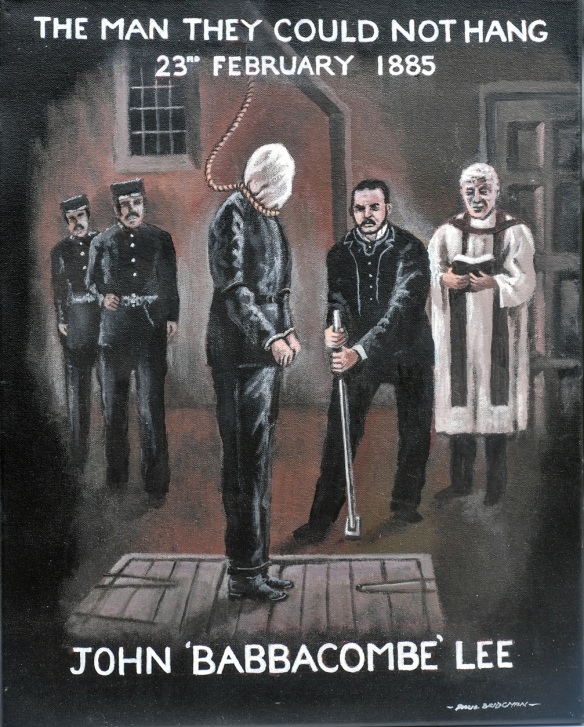 THIS PAINTING NOW BEING HERE ON DISPLAY AT THE JAIL.

FIRSTLY, AND FOR THE RECORD

A FORMAL STATEMENT FROM ANDY JONES, OWNER & CURATOR OF THE CRIME THROUGH TIME COLLECTION HERE AT LITTLEDEAN JAIL ……

IT HAD BEEN BROUGHT TO OUR ATTENTION THAT THE HIT CHANNEL 4 TV SERIES  – FOUR ROOMS, FIRST BROADCAST AT THE END OF MAY 2011, FEATURED  FELLOW CRIME MEMORABILIA COLLECTOR STEWART P EVANS,  AUTHOR OF THE 2004 PUBLICATION OF THE BOOK ENTITLED “EXECUTIONER- THE CHRONICLES OF JAMES BERRY VICTORIAN HANGMAN” . HE TOOK ONTO THE SHOW A SO-SAY JAMES BERRY HANGMAN’S  NOOSE CLAIMING  IT TO HAVE BEEN THE ORIGINAL ONE USED ON BERRY’S  FAILED EXECUTION OF JOHN ” BABBACOMBE ” LEE ON JULY 23RD 1885 AT EXETER JAIL .

WE WISH TO MAKE IT ABUNDANTLY CLEAR THAT THIS WAS NOT THE NOOSE USED, AND THAT THE ORIGINAL HANGMAN’S NOOSE , ALONG WITH A PERSONALLY HANDWRITTEN AND SIGNED LETTER FROM JAMES BERRY  TO THIS EFFECT,DATED 3 JULY 1897(WRITEN DURING HIS  RETIREMENT YEARS )  ARE HERE AT LITTLEDEAN JAIL ON PUBLIC DISPLAY .
(SEE ORIGINAL NOOSE AND LETTER PICTURES HERE ABOVE & BELOW  FOR REFERENCE )

THESE EXHIBIT ITEMS WERE PURCHASED AT AUCTION BY THE CRIME THROUGH TIME COLLECTION BACK IN THE YEAR 2000. STEWART HAD ALSO ATTENDED THE AUCTION WITH A VIEW TO PURCHASE BUT WAS SUBSEQUENTLY OUTBID BY OURSELVES .

THE PROPOSED SALE OF THE OTHER NOOSE OWNED BY STEWART P EVANS  FAILED TO SELL  ON THE CHANNEL 4 TV SERIES “FOUR ROOMS” . THIS WAS PROBABLY DUE TO KNOWLEDGE  THAT THE ORIGINAL NOOSE AND LETTER OF PROVENANCE FROM THE EXECUTIONER -JAMES BERRY WERE KNOWN TO BE  HERE ON PERMANENT DISPLAY AT THE CRIME THROUGH TIME COLLECTION ,   LITTLEDEAN JAIL, UK .

ON A PERSONAL LEVEL ANDY JONES WISHES TO ADD IT WAS DISAPPOINTING TO NOTE THAT WITH FELLOW CRIME MEMORABILIA COLLECTOR AND FORMER POLICE OFFICER  STEWART EVANS  HAVING KNOWINGLY BEEN AWARE OF THESE FACTS, HE STILL  SADLY TRIED TO DECEIVE   TV SHOW PRODUCERS , THE VIEWING PUBLIC , AND OTHER FELLOW COLLECTORS OF CRIME MEMORABILIA .

FURTHERMORE & FOR THE RECORD WE WOULD WISH TO ALSO ADD THAT WE HAVE HERE ON DIPLAY AN ORIGINAL JAMES BERRY PUBLIC EXECUTIONER CALLING/BUSINESS CARD . (  SEE BELOW)

AS AUTHOR STEWART P EVANS WILL ALSO AGREE AND ACCEPT ANDY JONES OF THE CRIME THROUGH TIME COLLECTION HAD ORIGINALLY INTRODUCED HIM TO THE FORMER OWNER OF THIS CALLING CARD – JOE MAWSON ( NOW DECEASED FORMER CRIME MEMORABILIA COLLECTOR ) .

JOE  HAD, AS RECOMMENDED BY ANDY JONES ,SUBSEQUENTLY PROVIDED WITHOUT CHARGE TO STEWART,  AN IMAGE OF THIS CARD FOR HIS BOOK, AS ACKNOWLEDGED WITHIN THE CREDITS OF HIS BOOK. #

HOPEFULLY THIS WILL RESPECTFULLY PUT THE RECORD STRAIGHT ON THESE SAID FRONTS.

ABOVE: An original oil painting by Gloucestershire artist Paul Bridgman of James Berry , here on display at The Crime Through Time Collection , Littledean jail . 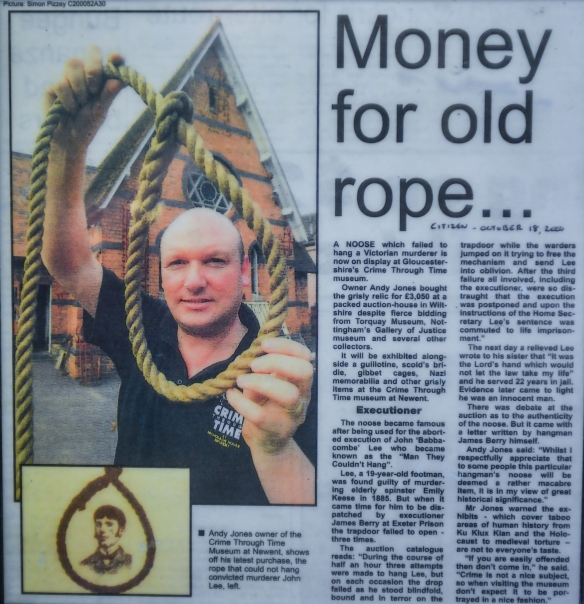 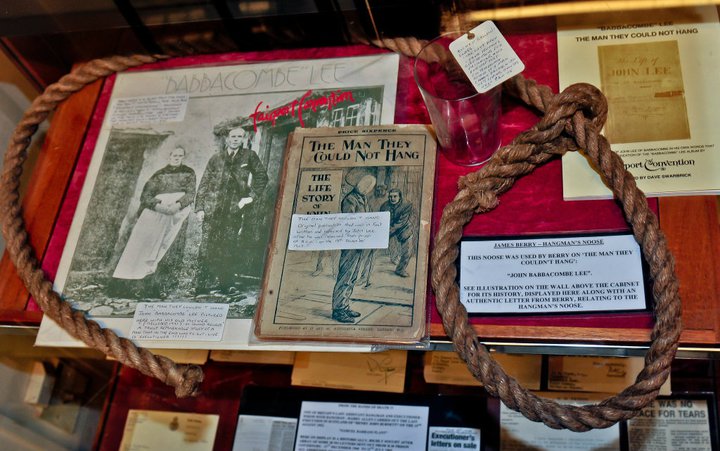 Above & below: The original James Berry personally handwritten and signed letter that had been originally acquired  alongside his noose, for which Berry clearly states the provenance of this noose as being both the one he had used in his first execution and thereafter the historic failed attempted  execution on John “Babbacombe” Lee. 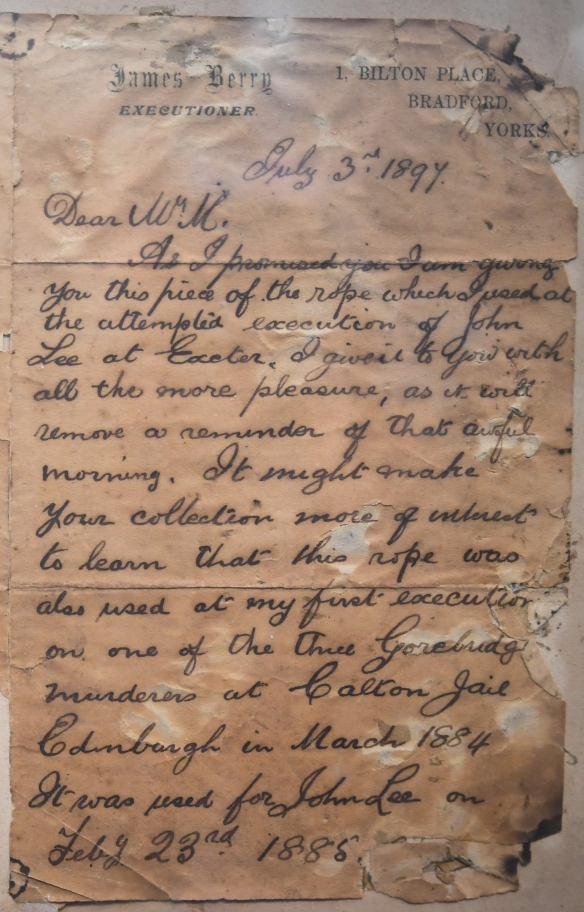 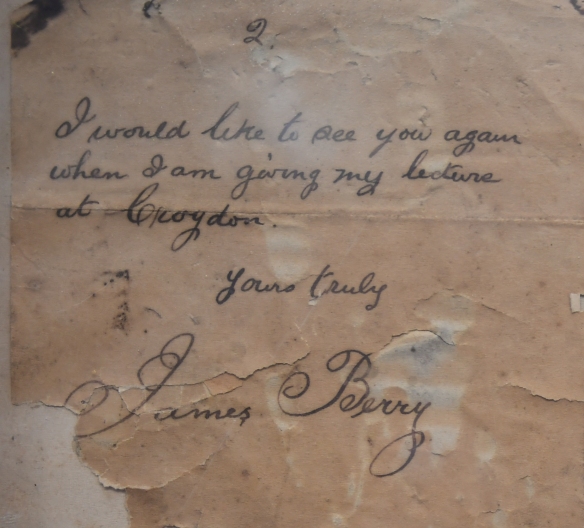 THIS CALLING CARD HAVING BEEN PARY OF THE JOE MAWSON ( DECEASED) CRIME MEMORABILIA COLLECTION,  LATER ACCQUIRED BY THE CRIME THROUGH TIME COLLECTION. THIS ITEM ALONG WITH THE OTHERS FEATURED HERE ARE NOW ON PUBLIC DISPLAY AT LITTLEDEAN JAIL .

Below: A rare and unseen personal photograph of fellow crime memorabilia and ephemera  collector Joe Mawson who was the previous owner of the exceptionally rare James Berry Executioner calling/business card.

This calling card having been previously featured in the book below and now on permanent display here at the jail. 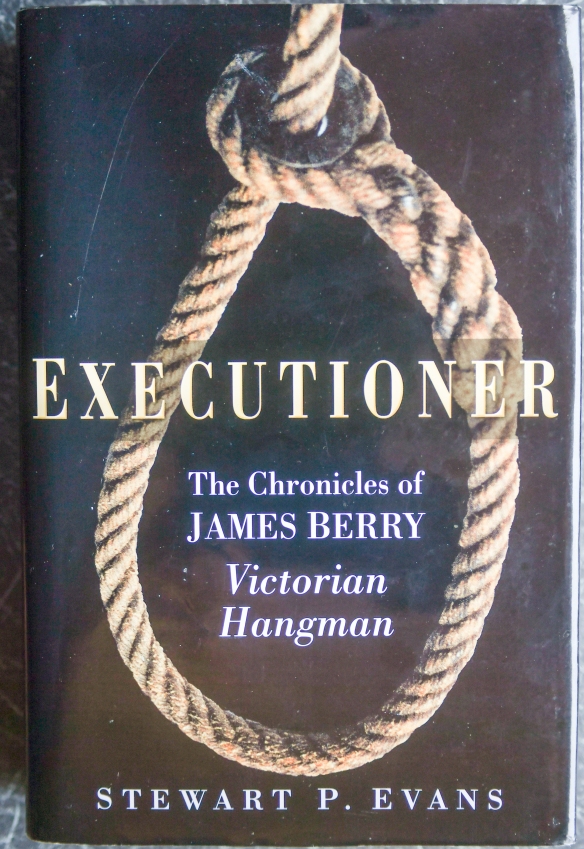 ABOVE & BELOW: THE BOOK WRITTEN BY STEWART P EVANS ALONG WITH A PERSONAL DEDICATION AND THANK-YOU NOTE TO PREVIOUS OWNER OF THE JAMES BERRY CALLING CARD JOE MAWSON .

NEWSPAPER ARTICLE BACK ON 05TH OCTOBER 2000 RELATING TO THE UPCOMING AUCTION SALE OF THE NOOSE AND HANGMAN’S LETTER …….SUBSEQUENTLY BOUGHT BY THE CRIME THROUGH TIME COLLECTION, NOW ON DISPLAY AT LITTLEDEAN JAIL 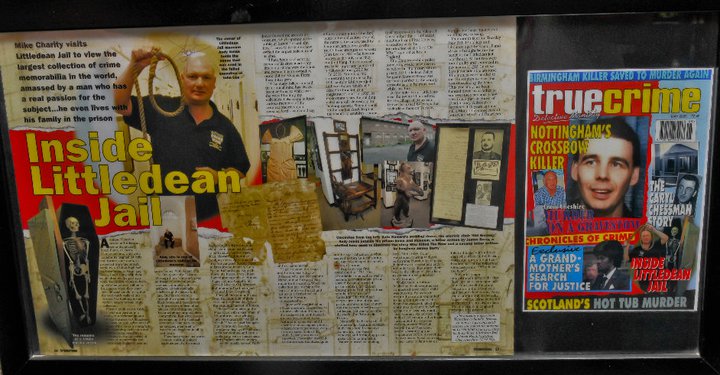 ABOVE: TRUE CRIME MAGAZINE FEATURE ON LITTLEDEAN JAIL   INCLUDING A REFERENCE TOO  THE ORIGINAL NOOSE USED BY JAMES BERRY ON THE FAILED EXECUTION ON THE MAN THEY COULD NOT HANG ….JOHN ” BABBACOMBE ” LEE.
ACQUIRED FROM AUCTION IN THE YEAR 2000 ALONG WITH FIRM LETTER OF PROVENANCE FROM JAMES BERRY STATING THAT NOT ONLY HAD IT BEEN USED ON LEE , THAT IT HAD ALSO BEEN USED FOR HIS FIRST EXECUTION IN 1884 .
TO ALL OTHERS THAT CLAIM THEY HAVE THE ORIGINAL NOOSE USED ON LEE ……. SORRY BUT ITS HERE ON DISPLAY AT LITTLEDEAN JAIL ALONG WITH THE HANDWRITTEN AND SIGNED LETTER OF 03RD JULY 1897 FROM JAMES BERRY ‘ ON HIS HOME ADDRESSED LETTER HEADED PAPER 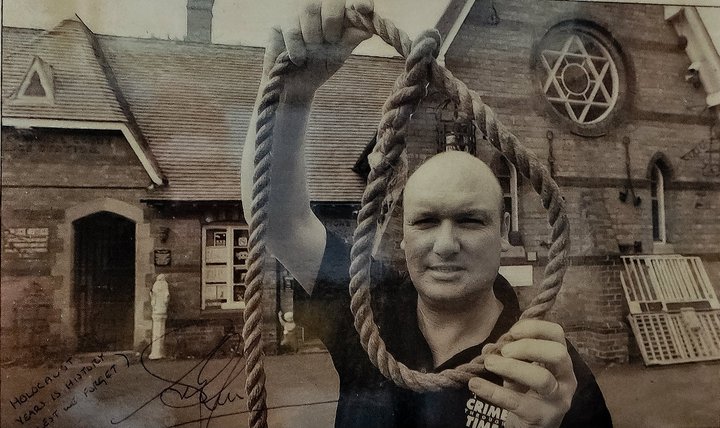 ABOVE:  Certificate of inspection of failed trap door 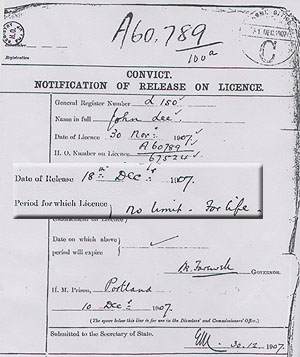 John Henry George Lee (1864 – c. 19 March 1945), better known as John “Babbacombe” Lee or “The Man They Couldn’t Hang”, was an Englishman famous for surviving three attempts to hang him for murder. Born in Abbotskerswell, Devon, Lee served in the Royal Navy, and was a known thief. In 1885, he was convicted of the brutal murder of his employer, Emma Keyse, at her home at Babbacombe Bay near Torquay on 15 November 1884. The evidence was weak and circumstantial, amounting to little more than Lee having been the only male in the house at the time of the murder, his previous criminal record, and being found with an unexplained cut on his arm. Despite this and his claim of innocence, he was sentenced to hang.

On 23 February 1885, three attempts were made to carry out his execution at Exeter Prison. All ended in failure, as the trapdoor of the scaffold failed to open despite being carefully tested by the executioner, James Berry, beforehand. As a result, Home Secretary Sir William Harcourt commuted the sentence to life imprisonment. Lee continued to petition successive Home Secretaries and was finally released in 1907. The only other man in history known to have survived three hanging attempts was Joseph Samuel.

Many theories have been advanced as to the cause of the failure, but Home Office papers show that the official report stated that incorrect assembly of the gallows mechanism allowed the trapdoor hinges to rest upon an eighth of an inch of drawbar, preventing them from opening when the doors were weighted. This incident helped lead to a standard gallows design to prevent a recurrence.

After his release, Lee seems to have exploited his notoriety, supporting himself through lecturing on his life, even becoming the subject of a silent film. Accounts of his whereabouts after 1916 are somewhat confused, and one researcher even speculated that in later years, there was more than one man claiming to be Lee. It was suspected that he died in the Tavistock workhouse  during the Second World War. However, one recent piece of research concludes that he died in the United States under the name of “James Lee” in 1945. According to the book The Man They Could Not Hang by Mike Holgate and Ian David Waugh, Lee’s gravestone was found at Forest Home Cemetery, Milwaukee. 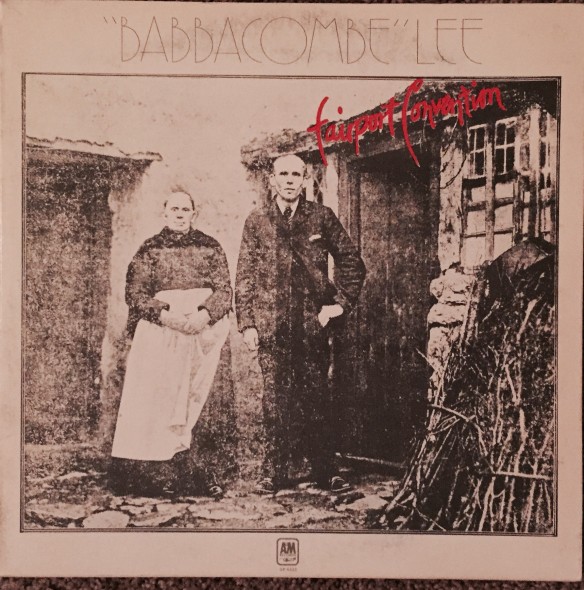 Below: The Hanging Song performed by Fairport Convention .

Above & below : One of several handwritten and signed James Berry letters to include close-up image here on display at Littledean Jail

ABOVE , Sadly unsure as to the origins and historical significance of this equally historically rare and unique 1861 half penny coin, which is intricately engraved,

This was presented some 17 months after the failed execution by James Berry of John “Babbacombe” Lee on February 23, 1885 .

( If anyone can shed any light on the significance of this coin and whom J Breeze was, please let us know.)

ABOVE AND BELOW: Pictured here are both sides of this rare coin, giving an indication of the actual size.