BRITAIN’S OLDEST FORMER GANGSTER  REVEALS ALL…. AGED 93 AS EXPECTED THIS STORY , FORTHCOMING BOOK AND INEVITABLE FORTHCOMING DOCUMENTARY AND POTENTIAL FILM WILL GO GLOBAL  IN 2017…. FOR SURE 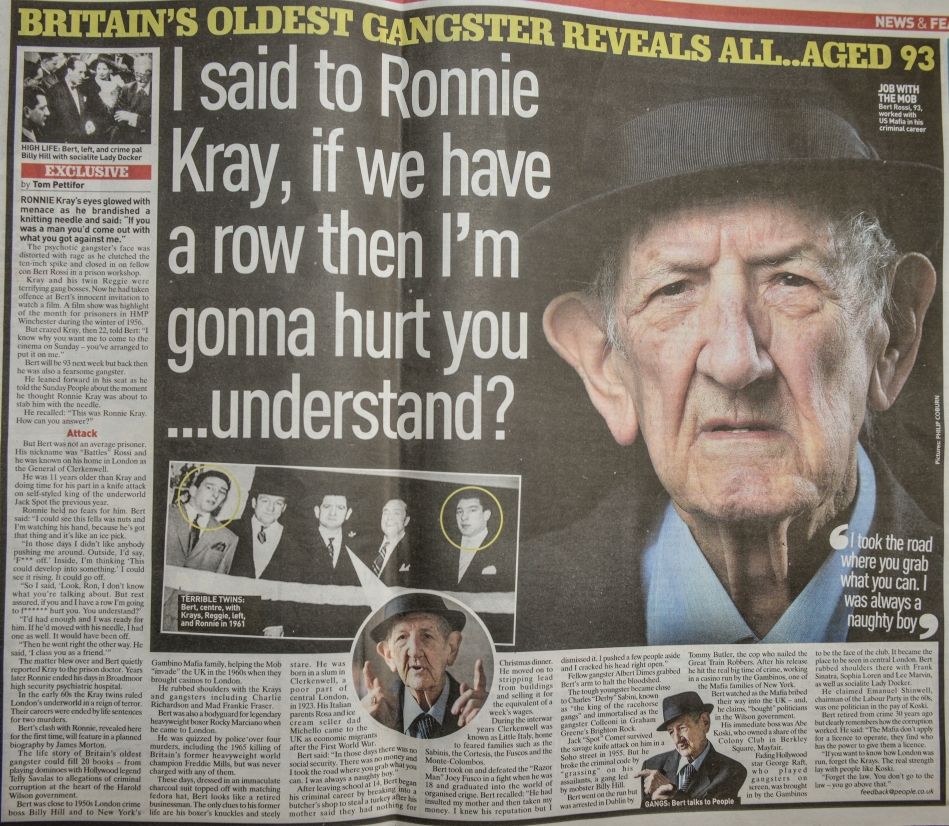 BELOW : BERTS “BATTLES” ROSSI’S AUTOBIOGRAPHY NOW ON SALE THROUGH VARIOUS OUTLETS INCLUDING AMAZON …. 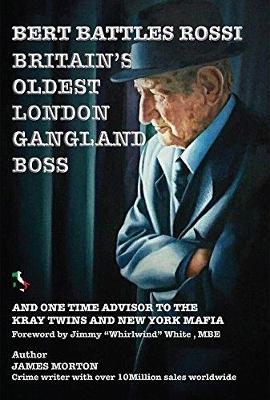 BRITAIN’S REAL LIFE EQUIVALENT TO AMERICA’S GANGLAND BOSS  ” AL CAPONE”  WHO WAS ACTIVE DURING THE 1950’S  AND BEYOND.

KNOWN TO MANY AS THE “GENERAL OF CLERKENWELL” , LONDON ,  ALSO TRUSTED FRIEND  AND MENTOR TO THE KRAY TWINS …  “BERT “BATTLE” ROSSI ”

HE WAS CLOSE FAMILY FRIEND AND ASSOCIATE TO THE ITALIAN MAFIA ORGANISATION  … THE GAMBINO CRIME FAMILY , WHO ARE OF COURSE WELL KNOWN AND FEARED THROUGHOUT THE WORLD, EVEN TODAY…. 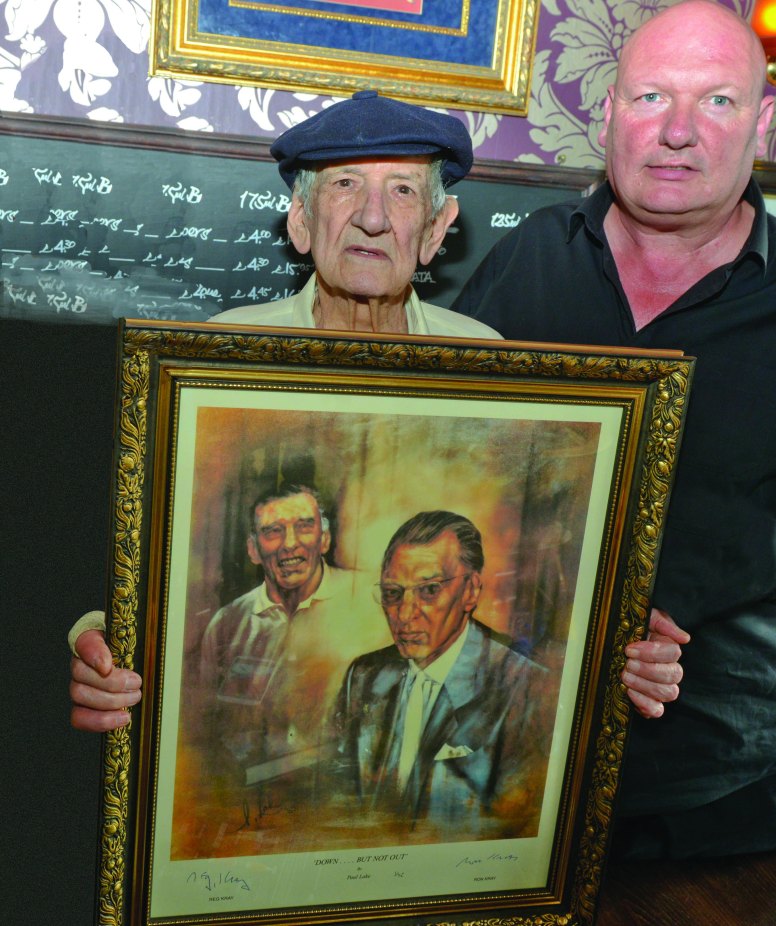 ABOVE : A RECENT MEET UP BETWEEN BERT ROSSI AND ANDY JONES OF THE CRIME THROUGH TIME COLLECTION , LITTLEDEAN JAIL , WHEREBY BERT PRESENTS ANDY WITH HIS OWN  PERSONAL  PAUL LAKE LIMITED EDITION PRINT SIGNED BY RON AND REG KRAY . THIS FOR DISPLAY AT THE JAIL WITH A FORTHCOMING BRIEF EXHIBITION ON HIMSELF …..  THIS TO COINCIDE WITH THE RELEASE OF HIS FORTHCOMING BOOK ….. WATCH THIS SPACE FOR FURTHER DETAILS …… BELOW IS THE SIGNED PRINT ON DISPLAY AT THE JAIL 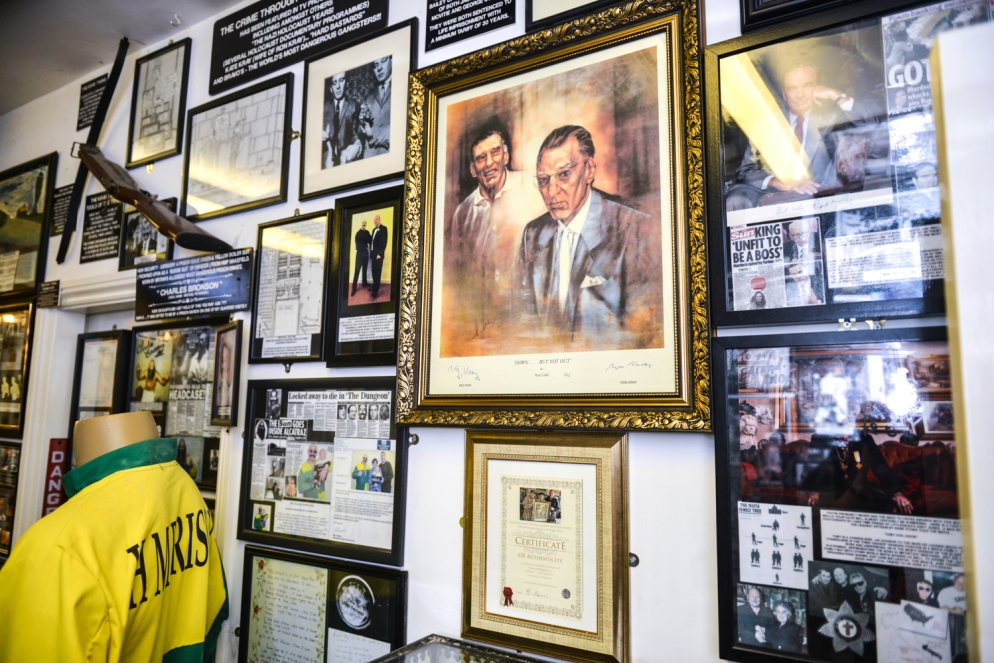 COMING SOON …. THE UNTOLD STORY OF BERT ROSSI ,WHO IS TODAY , AT THE GRAND OLD AGE OF 92 , THE UK’S  OLDEST LIVING GANGSTER

FOR ALL THOSE WHO ARE UNFAMILIAR WITH THE NAME …. MORE INTIMATE DETAILS OF HIS INCREDIBLE LIFE AND TIMES ARE TO BE PUBLISHED FOR THE FIRST TIME OVER THE NEXT FEW MONTHS …..

A BRIEF MEMO FROM BERT …..  FOR ALL THOSE INTERESTED IN THE LIFE AND TIMES OF BERT “BATTLE” ROSSI …. AND FOR THE RECORD …. BERT AT THE GRAND OLD AGE OF 92 HAS INFORMED ME THAT HE HAS NOW ENTERED THE DIGITAL SOCIAL NETWORK ERA AND IS HIMSELF NOW ACTIVLY INVOLVED AND IN CONTROL OF HIS OWN FACEBBOK PAGE  HE PERSONALLY READS ALL THE COMMENTS AND AGAIN PERSONALLY INFORMS HIS FAMILY AS TO WHAT TO REPLY  FOR AND ON HIS BEHALF … FOR HIS FACEBOOK PAGE  (SEE HERE) .

PLEASE DO NOTE HE IS NOT ACTIVELY ON THIS SITE 24/7 AS HE HAS MUCH MORE IMPORTANT COMMITMENTS ELSEWHERE ….. INCLUDING HIS SOON TO BE RELEASED BOOK ENTITLED “THE GENERAL OF CLERKENWELL”  , WHICH IS HOPEFULLY DUE TO BE RELEASED IN TIME FOR CHRISTMAS 2015, ALONG WITH  A DOCUMENTARY WITH TITLE ” BOMP” …. FOR WHICH VARIOUS TASTERS ARE NOW  AVAILABLE  BOTH ON OUR SITE HERE AND ON YOUTUBE . ALL AS HAS BEEN PERSONALLY AUTHORISED BY BERT HIMSELF.

INCONJUNCTION WITH THE FORTHCOMING BOOK LAUNCH AND DOCUMENTARY …. THE CRIME THROUGH TIME COLLECTION HERE AT LITTLEDEAN JAIL WILL BE STAGING A BRIEF ,BUT PERMANENT EXHIBITION ON THE LIFE AND TIMES OF BERT “BATTLE” ROSSI , IN AND AMONGST OTHER UK AND AMERICAN GANGLAND FIGURES …… WHICH WILL BE OPEN TO THE PUBLIC FOR THE 2016 TOURISM SEASON .

THERE HAS BEEN AND CONTINUES TO BE AN EVER INCREASING MEDIA INTEREST IN BERT’S STORY … PARTICULARLY AS HE IS THE OLDEST LIVING FORMER GANGLAND BOSS ….. MOST RECENTLY FEATURED IN THE ONLINE NATIONAL CRIME SYNDICATION MAGAZINE BLOG ( SEE HERE ) 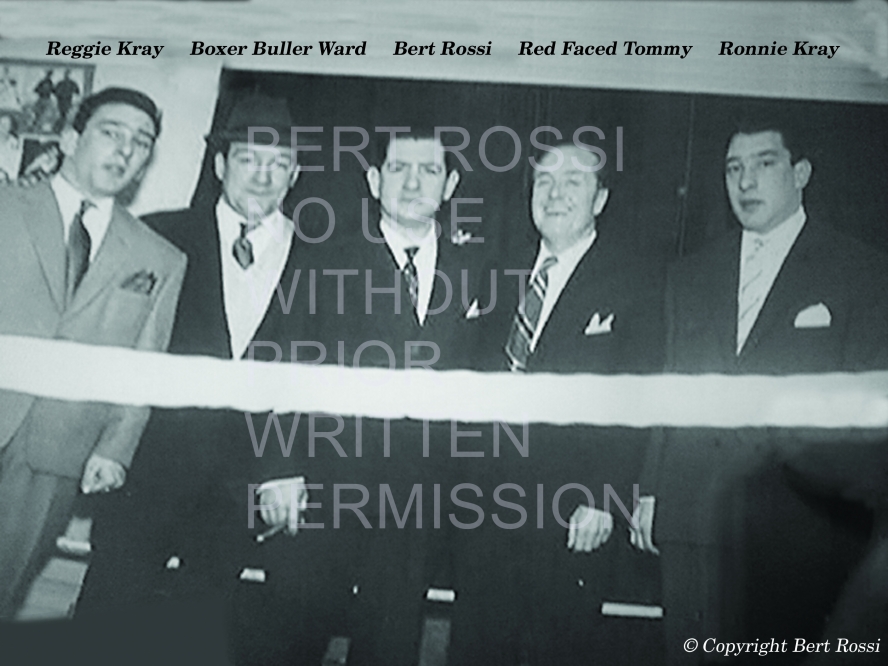 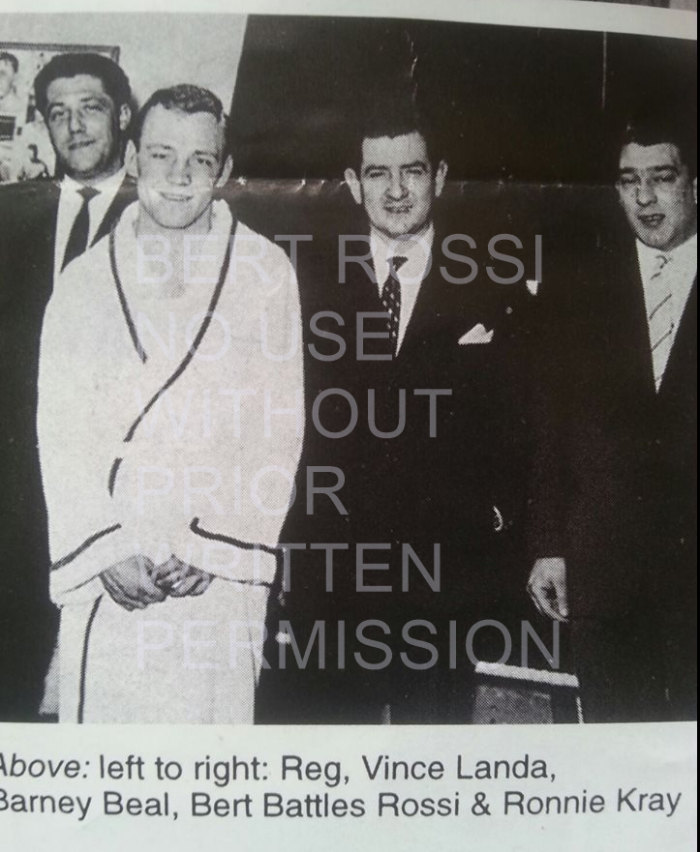 HERE BELOW IS A RECENT (AUGUST 2015 ) , VERY BRIEF INSIGHT VIDEO INTERVIEW WITH THE NOW 92 YEAR OLD FORMER LONDON MAFIA BOSS AND MENTOR TO THE KRAY TWINS 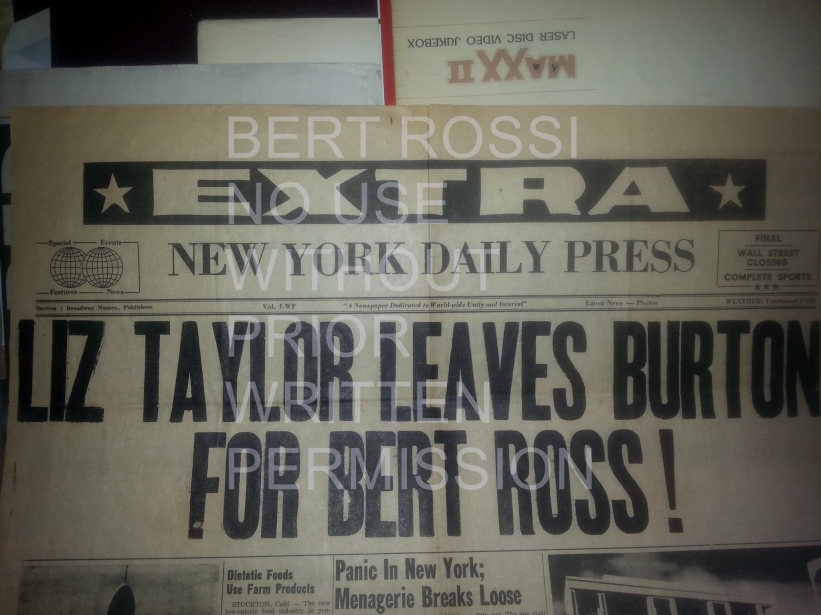 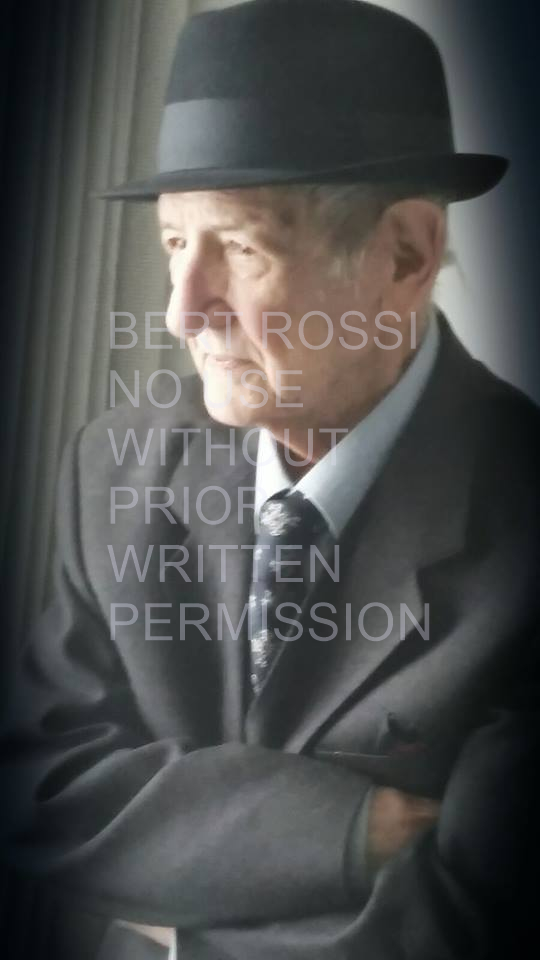 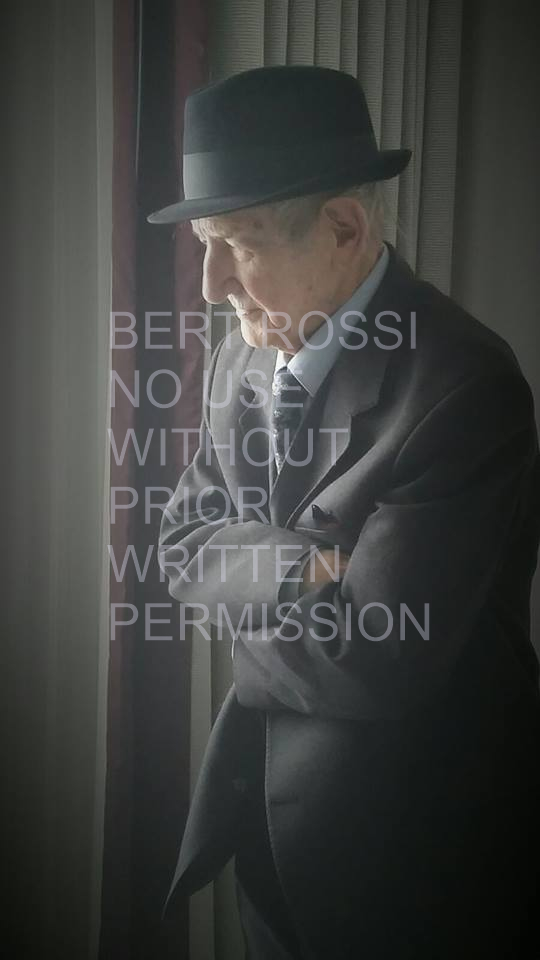 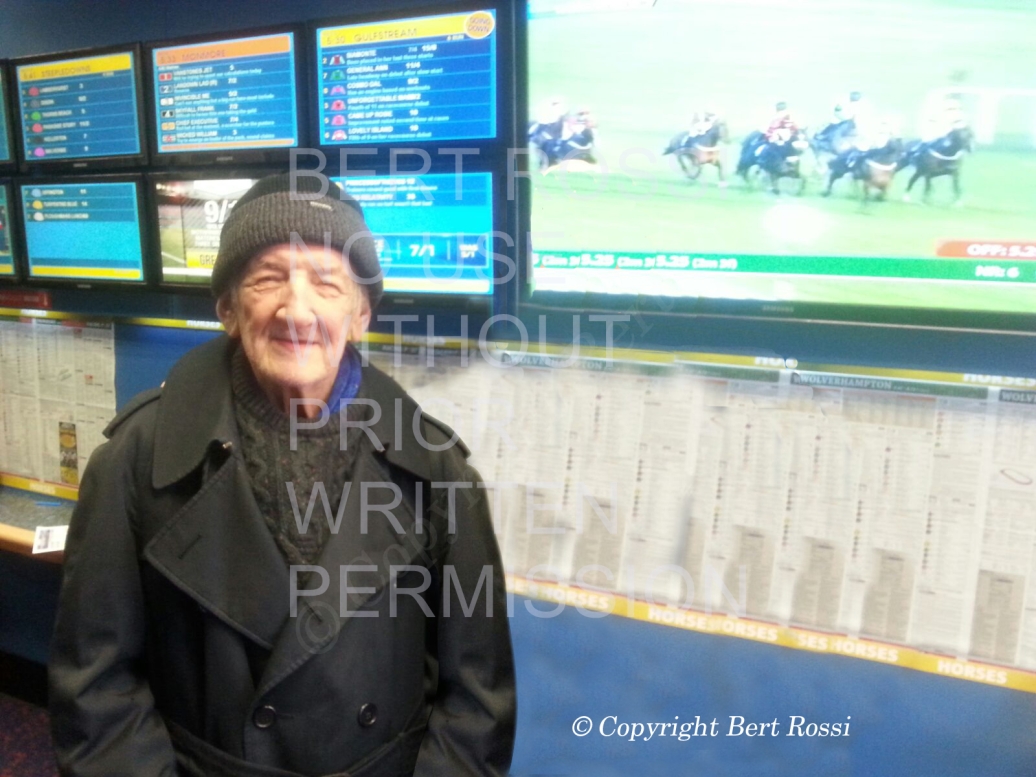 On a recent visit to the Bookies 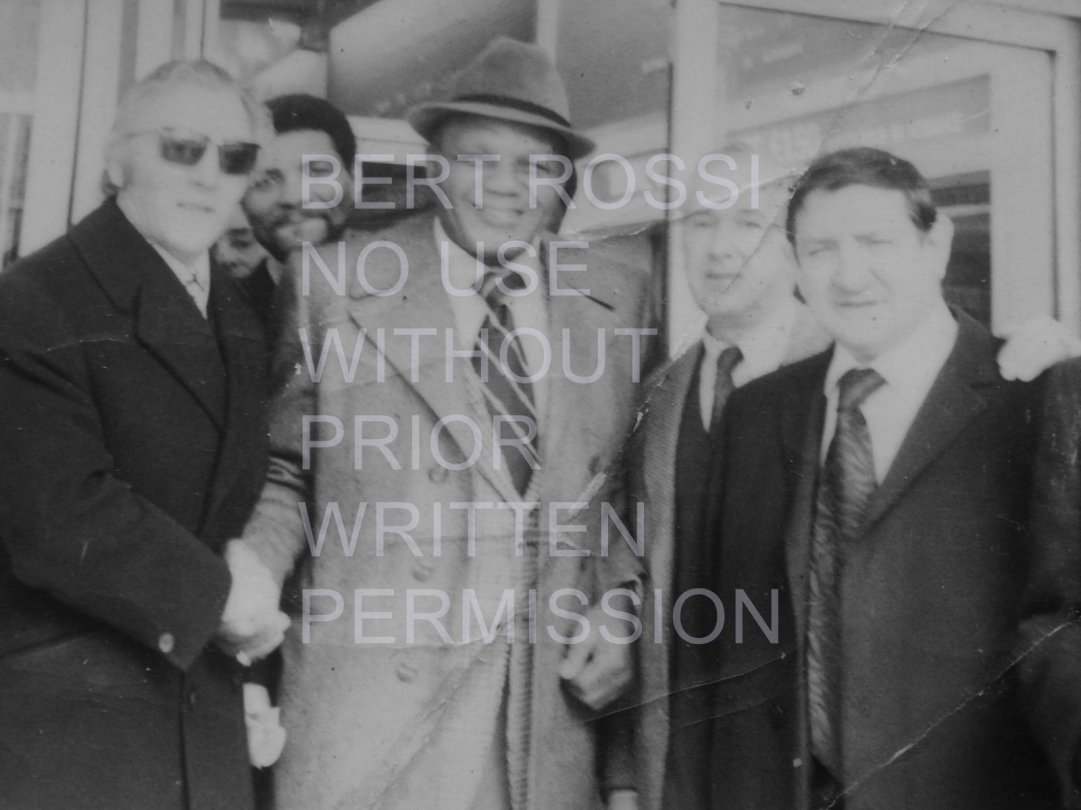 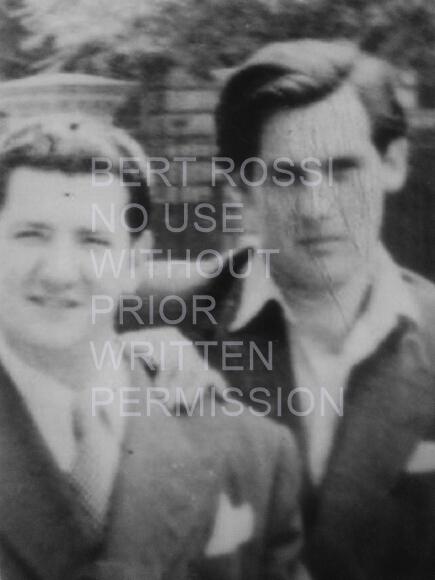 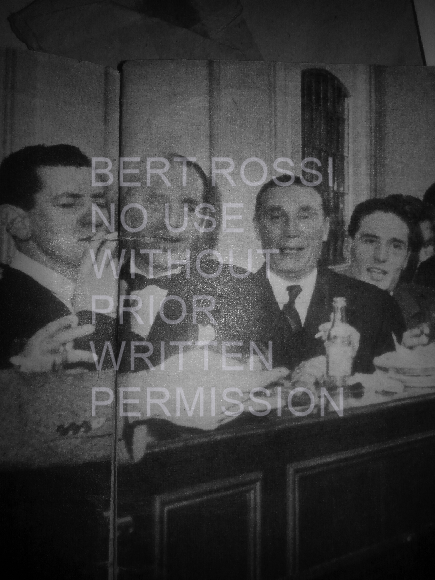 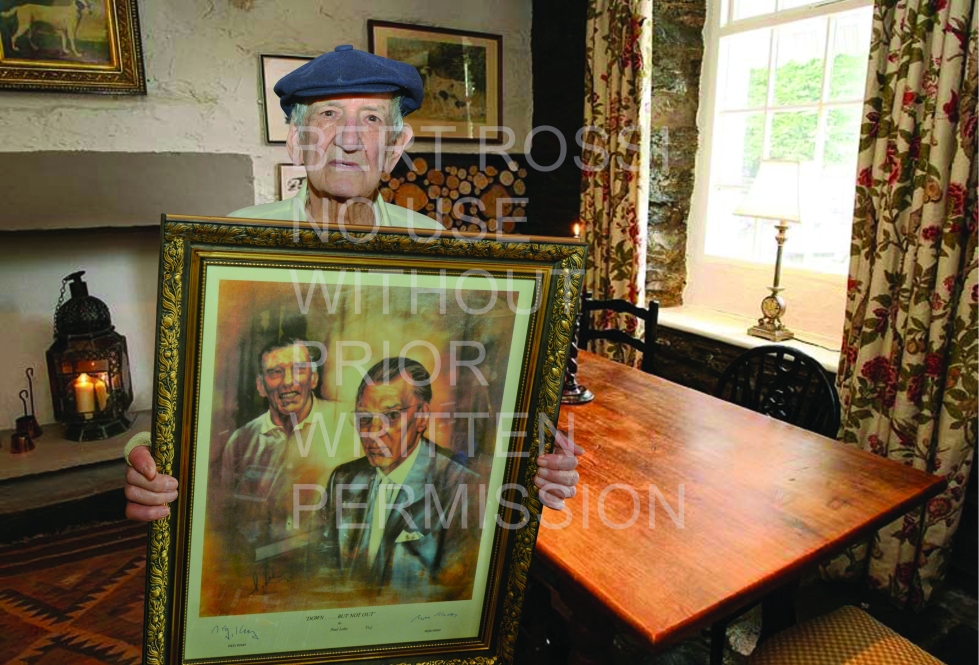 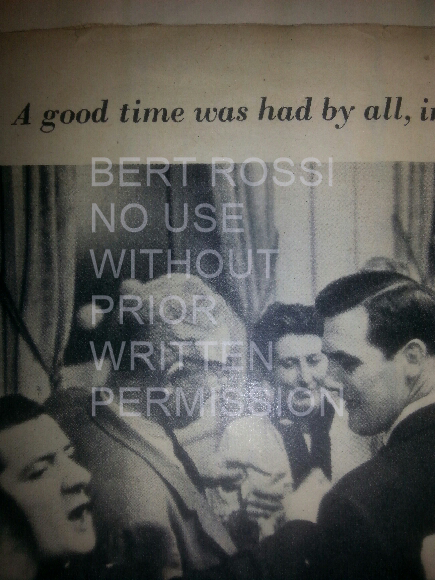 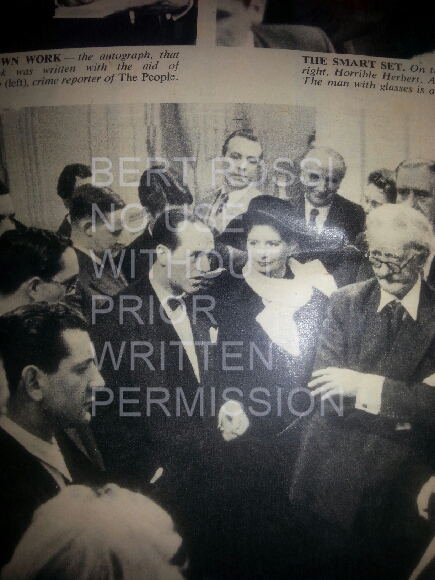 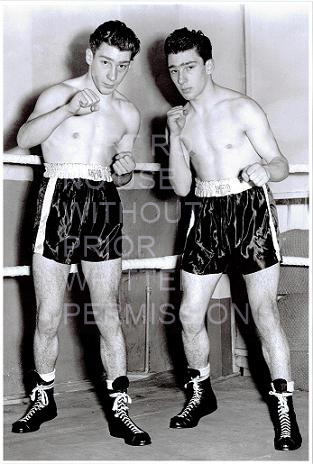 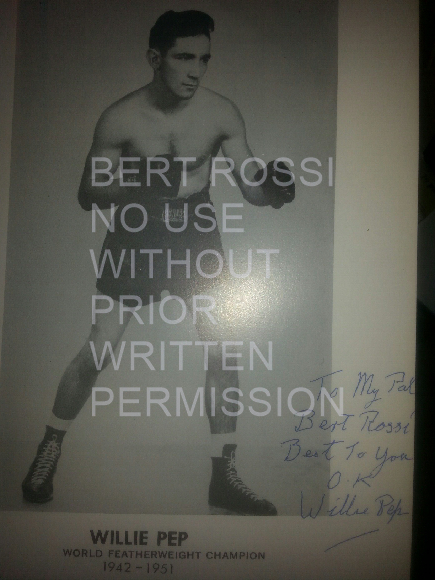 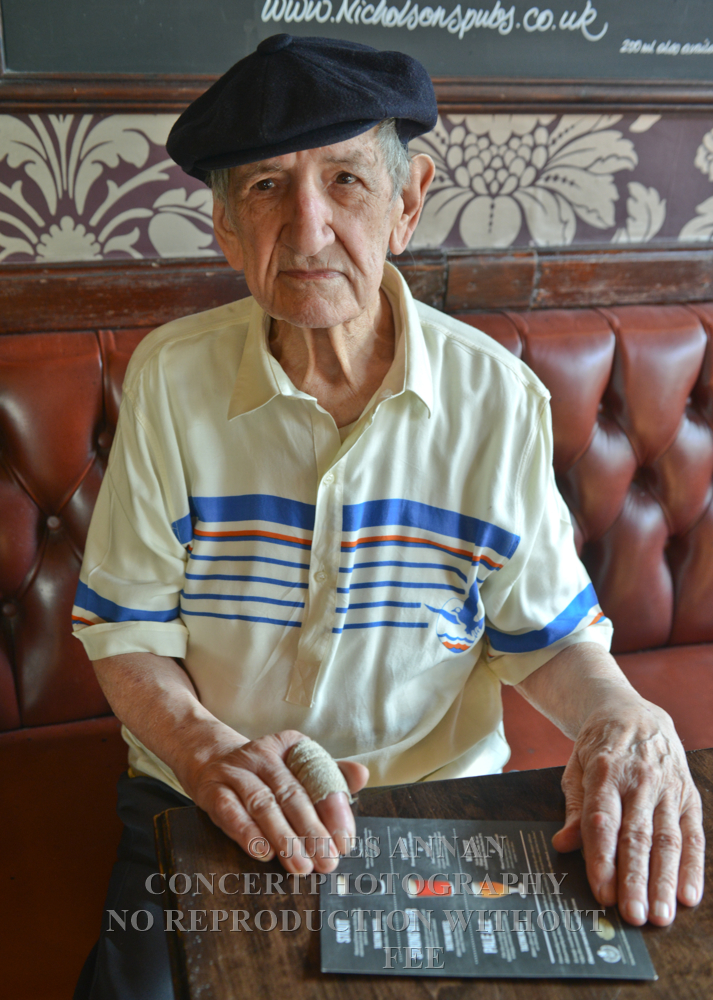 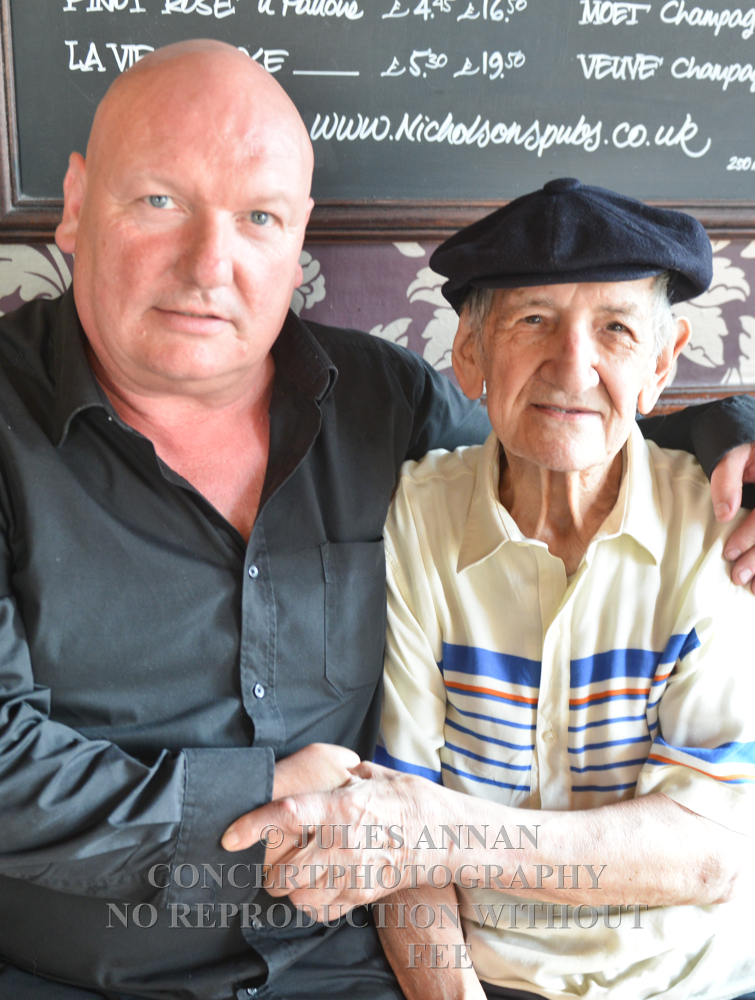 TRUE CRIME, GANGLAND,MAFIA, MURDERABILIA AND BEYOND…. IT’S ALL HERE AT THE CRIME THROUGH TIME COLLECTION , LITTLEDEAN JAIL

HERE AT THE CRIME THROUGH TIME COLLECTION WE FEATURE AND INCLUDE A GREAT MANY GANGLAND FIGURES INCLUDING “MAD” FRANKIE FRASER AS PART OF OUR TRUE CRIME AND GANGLAND  COLLECTIONS.

ALSO BELOW ARE SOME MORE INTERACTIVE BACKGROUND VIDEO FOOTAGE RELATING TO THE LIFE AND TIMES OF THIS NOTORIOUS CRIMINAL AND FORMER MEMBER OF THE RICHARDSON GANG WHO RULED THE LONDON GANGLAND SCENE IN THE 1960’S ALONG WITH THEIR RIVALS – THE KRAY TWINS . 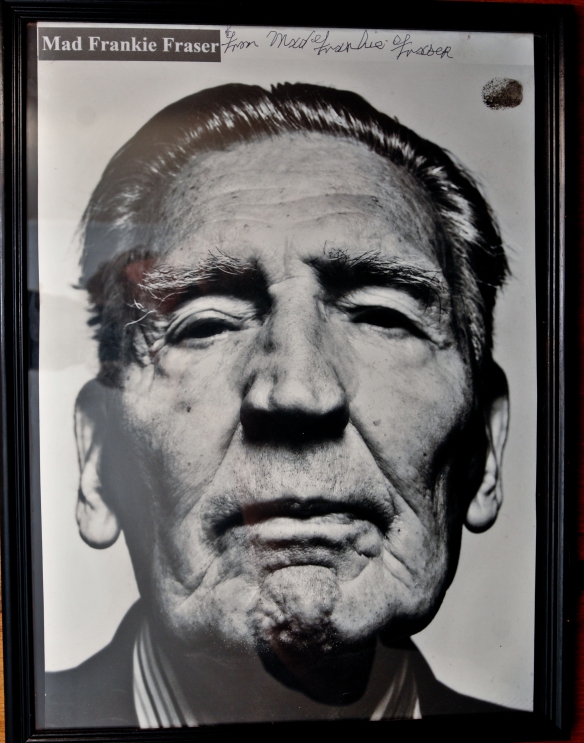 ABOVE IS ONE OF THE MANY PERSONALLY SIGNED GANGLAND MEMORABILIA ITEMS ON DISPLAY AT THE CRIME THROUGH TIME COLLECTION HERE AT LITTLEDEAN JAIL .

Born in Lambeth, south London, Fraser was a deserter during World War II, on several occasions escaping from his barracks. It was during the war that Fraser first became involved in serious crime, with the blackout and rationing, combined with the lack of professional policemen due to conscription, providing ample opportunities for criminal activities. In 1941, he was sent to Borstal for breaking into a Waterloo hosiery store and was then given a 15-month prison sentence at Wandsworth Prison for shopbreaking. Such were the criminal opportunities during the war, Fraser later joked in a television interview that he had never forgiven the Germans for surrendering.

Fraser confirms in his book ‘Mad Frank & Friends’ that his grandmother was a Canadian Red Indian.[4]

After the war, Fraser was involved in a smash-and-grab raid on a jeweller’s for which he received a two-year prison sentence, served largely at Pentonville Prison. It was during this sentence that he was first certified insane and was sent to the Cane Hill Hospital, London, before being released in 1949. During the 1950s his main occupation was as bodyguard to well-known gangster Billy Hill. He took part in more bank robberies and spent more time in prison. He was again certified insane while at Durham Prison and this time sent to Broadmoor. Aware of the punishments for bad behaviour in that institution, Fraser stayed out of trouble and was released in 1955. In 1956, the British mobster Jack Spot and wife Rita were attacked, on Hill’s say-so, by Fraser, Bobby Warren and at least half a dozen other men. Both Fraser and Warren were given seven years for their acts of violence.[5]

It was in the early 1960s that he first met Charlie and Eddie Richardson, members of the notorious Richardson Gang and rivals to the Kray twins.[6] One member of the criminal fraternity was quoted as saying that “Mad Frank joining the Richardson’s Gang was like China getting the atom bomb”.[citation needed] According to Fraser, it was they who helped him avoid arrest for the Great Train Robbery by bribing a policeman. Together they set up the Atlantic Machines fruit machines enterprise, which acted as a front for the criminal activities of the gang.[7] In 1966 Fraser was charged with the murder of Richard Hart who was shot at Mr Smiths’s club in Catford while other members including Jimmy Moody were charged with affray. The witness changed his testimonyand the charges were eventually dropped, though he still received a five year sentence for affray. Fraser has always maintained that, while he fought with Hart, he did not shoot him. He was also implicated in the so-called ‘Torture trial’, in which members of the gang were charged with burning, electrocuting and whipping those found guilty of disloyalty by a kangaroo court. Fraser himself was accused of pulling out the teeth of victims with a pair of pliers. In the trial at the Old Bailey in 1967 he was sentenced to 10 years imprisonment.[8]

Fraser’s 42 years served in over 20 different prisons in the UK were often coloured by violence.[9] He was involved in riots and frequently fought with prison officers and fellow inmates as well as attacking various governors. He was one of the ringleaders of the major Parkhurst Prison riot in 1969, spending the following six weeks in the prison hospital, owing to his injuries. Involvement in such activities often led to his sentences being extended. Whilst in Strangeways, Manchester in 1980 Fraser was ‘excused boots’ as he claimed he had problems with his feet so he was allowed to wear slippers. He was released from prison in 1985, where he was met by his son in a Rolls Royce.[10]

In 1991 Fraser was shot in the head from close range in an apparent murder attempt outside the Turnmills Club in Clerkenwell, London. He has always maintained that a policeman was responsible.

Fraser has become something of a celebrity, appearing on television shows such as Operation Good Guys,[11] Shooting Stars,[12] and the satirical show Brass Eye,[13] where he said Noel Edmonds should be shot for killing Clive Anderson (an incident invented by the show’s producers), and writing an autobiography. In 1999 he appeared at the Jermyn Street Theatre in London in a one man show, ‘An Evening with Mad Frankie Fraser’ (directed by Patrick Newley), which subsequently toured the UK.

He also appeared as East End crime boss Pops Den in the feature film Hard Men, a forerunner of British gangster movies such as Lock, Stock and Two Smoking Barrels and had a documentary made of his life Mad Frank which was released as part of the DVD The Ultimate Gangster DVD (2003 Gangster Videos), which featured crime figures Charles Bronson, John McVicar, Paddy Joe Hill, Albert Reading, Dave Courtney, Roy Shaw, Norman Parker, Marilyn Wisbey and axe victim Eric Mason. This programme was also shown on The Crime & Investigation Channel & Biography Channel in the UK and was directed by Liam Galvin.

He now gives gangland tours around London, where he highlights infamous criminal locations such as the Blind Beggar pub. He lives in the Walworth area of London.

Fraser is also a big Arsenal fan, and his grandson Tommy Fraser is a professional footballer,[14] and formerly captain of League Two side Port Vale. According to legend, when he was at Brighton, Tommy was asked by a local reporter if his grandfather ever came to watch him play. “No,” came the reply. “But he reads your reports and he was unhappy you only gave me six out of 10 last week.” Tommy never got less than seven again.[citation needed] Another of Fraser’s grandsons, James Fraser, also spent a short time with Bristol Rovers. Another grandson, Anthony Fraser, was being sought by police in February 2011 for his alleged involvement in alleged £5million cannabis smuggling ring.[15]

London-based production company Classic Media Entertainment has secured the film rights to Mad Frankie’s life. A feature film production is currently in development and the production has Fraser’s endorsement[16].