POLITE WARNING …  THE CRIME THROUGH TIME COLLECTION AT LITTLEDEAN JAIL (WHERE UPON THIS EXHIBITION IS HOUSED )  IS NOT SUITABLE FOR CHILDREN OR THOSE OF YOU WHO ARE EASILY OFFENDED , DISTURBED OR OF A SENSITIVE NATURE

THE CONTENT HERE ON DISPLAY BOTH ONLINE AND WITHIN THE JAIL IS IN THE MAIN HARD HITTING , GRAPHIC, EXPLICIT , IN YOUR FACE , TONGUE IN CHEEK , CONTROVERSIAL AND TO MANY … VERY DISTURBING

Used original Zyklon B 100gram sized canisters from one of the first Nazi gas chambers situated at Grafeneck Euthanasia Center, housed in Grafeneck Castle, Germany . It had officially opened in January 1940 and was closed on the orders of Nazi warlord Himmler in December 1940 . This facility was mainly used to exterminate mentally Handicapped and retarded victims as part of the Nazi euthanasia program. These canisters are exceptionally rare find from what was one of the earliest gas chambers and crematorium facilities . There is evidence that exists to the effect that a minimum 10, 654 were gassed there, though inevitably many more victims were murdered there before its closure . these canisters are now on public display at the Crime Through Time Collection, Littledean Jail 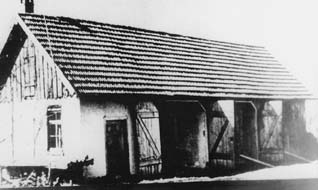 The former medieval castle Grafeneck was built on a hill near Marbach.
On 24 May 1939, members of Aktion T4 visited the buildings in order to find out if it could be used for their killing programme. On 14 OctoberGrafeneck Castle was duly confiscated. Between 10 and 15 manual labourers from nearby villages started to convert the castle into a killing centre.

300 m away from the castle several barracks were built, fenced in with a hoarding up to 4 m high. On the first floor of the castle the following facilities were installed: accomodations and offices for the doctors, a registry office, a police office, the office for the comfort letters and others. On the second floor, small living- and sleeping rooms for the personnel were installed. The main building of the killing facility was a barrack (68 m long and 7 m wide), which included several rooms. In one of them 100 beds were placed, covered with straw-bags. Three big buses for transportation of the victims and an ambulance car stood in a wooden garage. Two mobile cremation ovens were located in another wooden barrack. Because of the immense heat, generated by the round-the-clock cremation, the roof of the barrack was removed and after a short time the surrounding trees even blackened. The gas chamber, resembling a shower bath, could hold 75 persons.
A former horse stable (round, and 15 m in diameter) probably served as storage room for the corpses. At the bottom of the hill, at the access road, a high hoarding and a guardhouse were built. Fences with barbed wire surrounded the whole castle whilst armed guards with dogs patrolled these perimeters.

In mid-November 1939, SS men, typists and other personnel arrived and were supplemented during early January 1940 by approximately 25 nurses, some being male. In mid-January the cremation ovens were delivered. On 18 January 1940 the first transport of 25 handicapped men arrived fromEglfing-Haar near Munich, managed by the Grafeneck chief Dr Horst Schumann. He joined T4 since early October 1939, after a meeting with Viktor Brack in Hitler‘s chancellery. In early summer of 1940 he was ordered to the Sonnenstein euthanasia centre. Successors in Grafeneck: Dr Ernst Baumhardt and finally Dr Günther Hennecke.
Chief of administration became Christian Wirth, a detective superintendent and SS-Obersturmführer. He supervised the first gassings. Later he became inspector of all Aktion Reinhard extermination camps.

The killing continued until 13 December 1940. Then Grafeneck was no longer part of the euthanasia programme because, according to the plan, all handicapped persons from the Grafeneck operational area had been killed. Some of the personnel went on holiday while some were ordered to theHadamar euthanasia centre. A few remained at the castle to cover up all tracks of the actions that happened there.
10,824 victims were gassed and cremated at this facility. 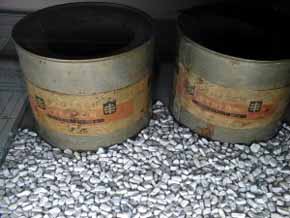 WHAT IS ZYKLON B? 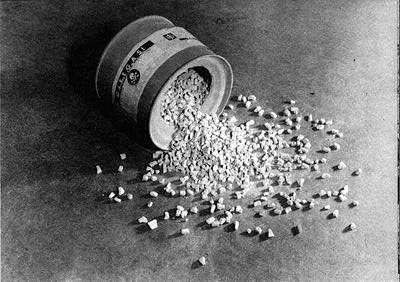 Zyklon B (German pronunciation: [tsykloːn ˈbeː]; also spelled Cyclon B or Cyclone B) was the trade name of a cyanide-based pesticideinvented in the early 1920s, and manufactured by German chemical conglomerate IG Farben. Zyklon B consisted of hydrogen cyanide(prussic acid), a stabilizer, a warning odorant (ethyl bromoacetate), and one of several adsorbents. Zyklon A was a previously produced liquid pesticide, which released hydrogen cyanide in a chemical reaction with water. After the invention of Zyklon B, Zyklon A production ceased.

The product is infamous for its use by Nazi Germany to murder an estimated 1.2 million people, including approximately 960,000 Jews, ingas chambers installed in several extermination camps during the Holocaust. One of the co-inventors of Zyklon B, chemist and businessman Bruno Tesch, was executed by the British in 1946 for his role in this operation.

The containers above hold Zyklon-B pellets (hydrocyanic acid) that vaporize when exposed to air. Originally intended for commercial use as a disinfectant and an insecticide, the Nazis discovered through experimentation the gas could be used to kill humans.

The brand of Zyklon-B used by the Nazis contained substances which gave the pellets a blue appearance and left blue stains inside gas chambers which can still be seen today in chambers that were left intact.

During the killing process, prisoners at Auschwitz and other killing centers were forced into the air-tight chambers that had been disguised by the Nazis to look like shower rooms. The Zyklon pellets were then dumped into the chambers via special air shafts or openings in the ceiling.

The pellets would then vaporize, giving off a noticeable bitter almond odor. Upon being breathed in, the vapors combined with red blood cells, depriving the human body of vital oxygen, causing unconsciousness, and then death through oxygen starvation.