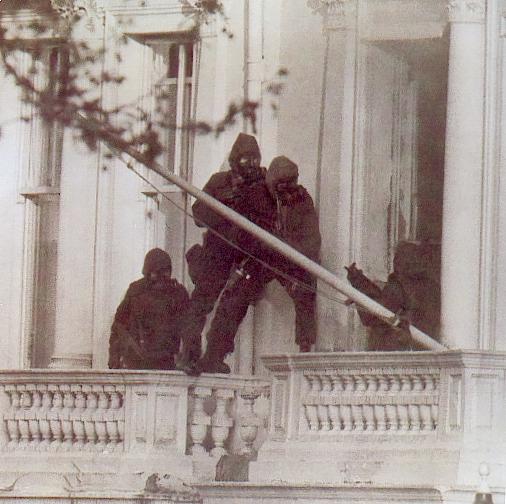 ABOVE IS A RARE  JOHN McALEESE ( SIGNED AS JOHN MAC)  LIMITED EDITION HECKLER AND KOCH POSTER. THIS TO COMMEMORATE THE SUCCESSFUL SAS OPERATION NIMROD, STORMING OF THE IRANIAN EMBASSY TO END THE  SIEGE ON MAY 5, 1980 .THIS BEING ON DISPLAY HERE IN AND AMONGST OUR SAS WHO DARES WINS EXHIBITION AT THE JAIL . 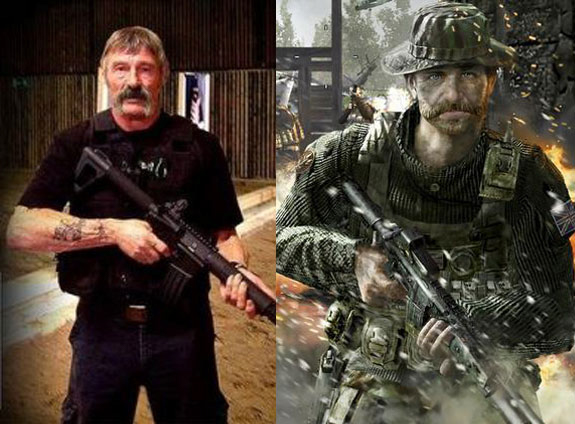 ABOVE: A COUPLE OF PICS OF JOHN McALEESE

DO COME VISIT AND SEE OUR EVER EXPANDING  AND HISTORICALLY  INTRIGUING PRIVATELY OWNED COLLECTION OF SAS MEMORABILIA AND PARAPHERNALIA.

HOPEFULLY THIS  PROVIDES YOU AS VISITORS WITH A  FASCINATING INSIGHT INTO THE HEROIC SAS AND INDEED OTHER SPECIAL FORCES THAT WE FEATURE HERE ON DISPLAY . 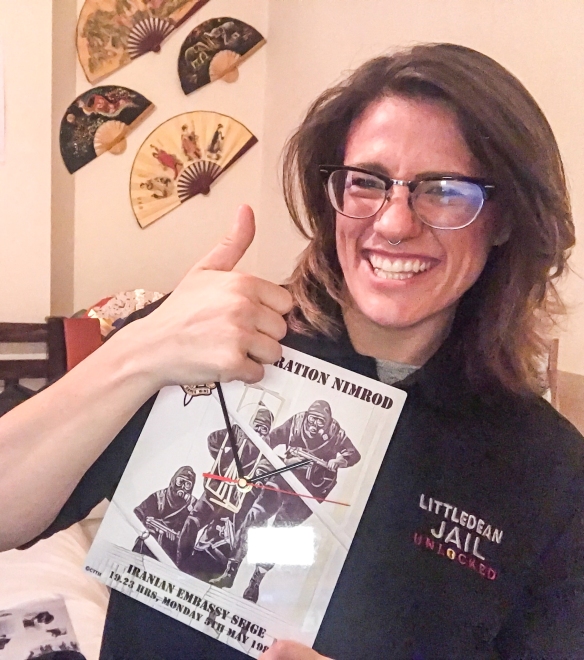 ABOVE AND BELOW: JOHN McALEESE’S TREASURED DAUGHTER HAYLEY PICTURED WITH SOME OF THE EXCLUSIVE SAS MERCHANDISE  … FEATURING JOHN MAC, WHICH HAS KINDLY BEEN PERSONALLY SANCTIONED AND APPROVED BY HAYLEY.

ALSO HAYLEY PICTURED (WITH BLONDE HAIR)  ,WITH HER FATHER. 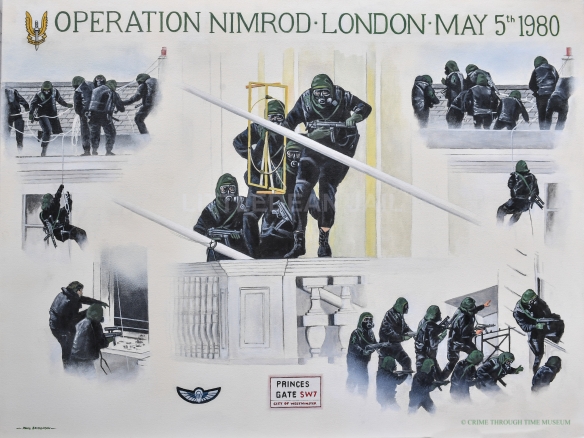 ABOVE AND BELOW : COPIES OF THE ORIGINAL PAINTINGS BY PAUL BRIDGMAN ON DISPLAY AT THE CRIME THROUGH TIME COLLECTION , LITTLEDEAN JAIL.

HERE BELOW IS AN ORIGINAL ORDER OF SERVICE OF THE SAS FUNERAL FOR  JOHN McALEESE ALONG WITH SOME INFORMATIVE BACKGROUND INFORMATION AND INTERACTIVE VIDEO FOOTAGE . 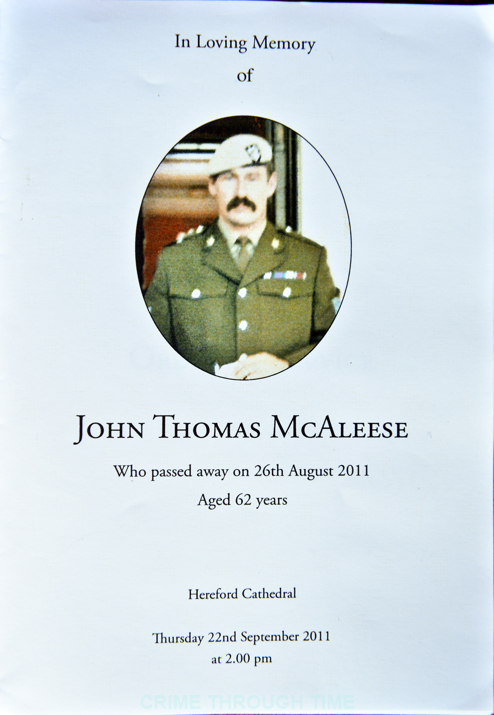 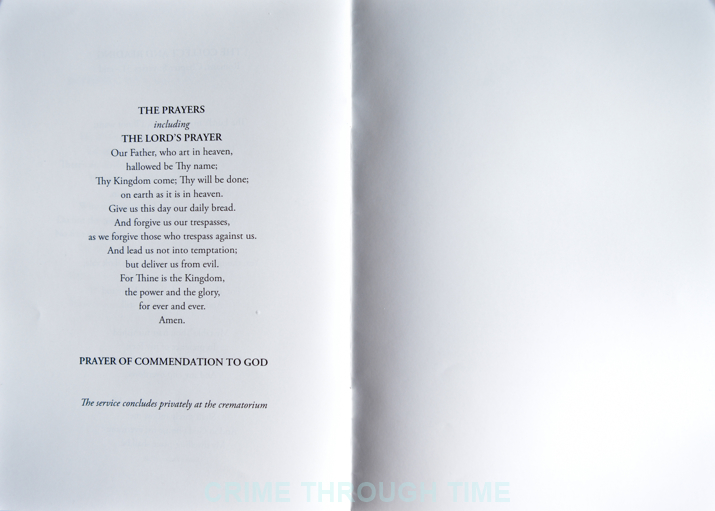 BELOW IS AN EXCEPTIONALLY RARE  JOHN McALEESE HAND SIGNED ORIGINAL PHOTOGRAPH (SIGNED AS JOHN MAC ) . ALSO SIGNED BY PETE WINNER (AS SOLDIER I ) … AND PETE SCHOLEY . THE PHOTOGRAPH SHOWS THE THEN PRIME MINISTER – MARGARET THATCHER WITH  THREE UN-NAMED MEMBERS OF THE SAS  OUTSIDE THE SAS “KILLING HOUSE” IN 1980 SHORTLY AFTER THE IRANIAN EMBASSY SIEGE,  NOW ON DISPLAY AT LITTLEDEAN JAIL AS PART OF THE “SAS -WHO DARES WINS” EXHIBITION

BELOW IS THE ORIGINAL METROPOLITAN POLICE FORENSIC EXHIBIT IDENTIFICATION TAG (FORM 420) THAT WAS ATTACHED TO THE WEAPON FIRED BY SAS TROOPER- JOHN McALEESE DURING THE IRANIAN EMBASSY SIEGE  ON THE 5TH MAY 1980. PERSONALLY SIGNED BY BOTH HIM AND THE INVESTIGATING OFFICERS WHO WERE HANDED ALL THE USED WEAPONS AFTER THE SUCCESSFUL OPERATION . NOW ON DISPLAY AT LITTLEDEAN JAIL AS PART OF THE “SAS -WHO DARES WINS” EXHIBITION

SAS hero John McAleese, who was involved in the dramatic raid that ended the 1980 siege on the Iranian Embassy in London, has died, the Foreign Office confirmed.
Published on Thursday 1 September 2011 14:23

an UNSUNG hero is finally to be honoured by his home town. John McAleese, the SAS legend from Laurieston who led the dramatic raid on the Iranian embassy in London more than 30 years ago, died in Greece last Friday. Now there are moves to posthumously award him the Freedom of Falkirk, an honour most recently given to servicemen and women from the Second World War. However, the priority for his grief-stricken family is to bring the former soldier’s body home to allow the funeral to take place. Last night (Wednesday), his twin brother Billy (62) said: “We don’t know when we’ll get him back. Apparently it costs £20,000 and I don’t know what’s going to happen.”

He added that he was still struggling to come to terms with the loss of his twin, who was born 20 minutes after him. Billy said: “My son got a text message from John’s daughter Hayley and told me. I still can’t believe it.” The pair were brought up, along with older sister Eleanor, in the family home in Livingston Drive by parents Bill and Grace. They went to Laurieston Primary then Graeme High School. John had a variety of jobs as a teenager, including at Grangemouth Docks and the British Aluminium. A former Army cadet, he joined the Royal Engineers in 1970, serving around the world for over 23 years. He spent 17 years with 22 SAS and was often seconded to protection duty, guarding prime ministers and royalty. But it was his major role in rescuing 19 hostages in 1980 that put him in the spotlight. Days earlier, six armed men had taken the hostages and demanded the release of political prisoners. The world watched as the events unfolded in dramatic TV coverage. Then a Lance Corporal, John was in full view on the balcony, laying the explosive charge and leaping back as the blast blew in the windows. Billy said: “I saw it on TV and, although they were masked, I knew it was him. I phoned his wife to ask where he was and she said he was on holiday in London but I knew that wasn’t true. “He didn’t talk a lot about what he did, he couldn’t. John got the Military Medal while in Northern Ireland but I never heard why.” After leaving the Army, John worked as a security consultant and in 2003 co-presented a BBC TV programme ‘The SAS: Are You Tough Enough?’ However, two years ago he was back in the spotlight but in tragic circumstances. His son Paul, a sergeant in the 2nd Battalion the Rifles, was killed in Afghanistan. Announcing her father’s death, daughter Hayley (28) said she believed that he had died of a broken heart on the eve of the anniversary of Paul being killed. Married twice, John is also survived by son Kieran and step-daughter Jessica. Announcing plans for the Falkirk honour, Provost Pat Reid said: “He was very much an unsung hero and it would be appropriate for us to confer this honour, the highest the district can give, to mark his courage.